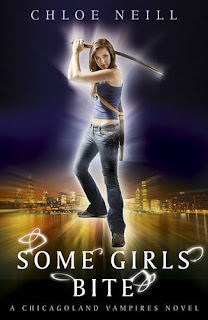 Sure, the life of a graduate student wasn’t exactly glamorous, but it was Merit’s. She was doing fine until a rogue vampire attacked her. But he only got a sip before he was scared away by another bloodsucker—and this one decided the best way to save her life was to make her the walking undead.

Turns out her savior was the master vampire of Cadogan House. Now she’s traded sweating over her thesis for learning to fit in at a Hyde Park mansion full of vamps loyal to Ethan "Lord o’ the Manor" Sullivan. Of course, as a tall, green-eyed, four-hundred- year-old vampire, he has centuries’ worth of charm, but unfortunately he expects her gratitude—and servitude. But an inconvenient sunlight allergy and Ethan’s attitude are the least of her concerns. Someone’s still out to get her. Her initiation into Chicago’s nightlife may be the first skirmish in a war—and there will be blood.(Summary from Goodreads.com)

Chloe Neil's debut novel is,in my opinion,very promising!I was pleasurably surprised with Some Girls Bite,although i wasn't thrilled about it.
I really liked the story,it was a new and fresh addition in the vampire universe that i didn't expect.The vampire society structure was something i haven't read before and although i found it a bit strange,i have to admit that Neil put much thought to create the background of her book.I mean,ok,in Hammilton's Anita Blake series,vampires are also known to everyone,but here it was completely different.The House's system was a fresh addition that i loved!I didn't love though the restraints by which they lived... Beeing allowed to make only a handful of vampires every once in a while...?That's so un-vampire like!
I also really liked Merit!She was a complete character,with flaws,who actually thought before acting,and who throughout the book was consistent.From the first pages,she is unwilling with her new vampire status and although she's trying to adjust at her new life,she doesn't jump from unwilling to big fan of vampires.I loved that part of her,mostly because in most books,all the heroines,although moaning from the start about the bad things in their lives,sooner than later forget everything.
What i didn't like was that this was supposed to be an action packed romance but i saw little of both... The romance,well,just didn't exist.Apart from an attraction there wasn't much else... And the hot vampire Master,well,he also didn't do anything to deserve the title!He looks like Beckham and that's all???Come on,i don't even like Beckham to be honest!And as far as the action scenes are concerned,they too were unsatisfactory not to mention non existent.
I also have to say that this book took me an awful lot time to read it and that's not a good sign for any book.I found myself tired at times with all the vampire politics and the Canon by which they lived and although i think it was necessary to describe some things in order to understand how the author imagined her world,i also think that it could be done with less details.It took a lot of time to pick up the pace and by the end i felt that it had more to give.
In overall,keeping in mind that it was a debut novel,it was a decent book and i feel that the second one in the series will be better,at least it will be free of any vampire politics unless necessary!
Posted by Unknown at 00:18