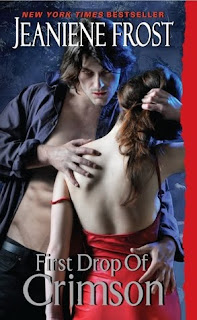 The night is not safe for mortals. Denise MacGregor knows all too well what lurks in the shadows - her best friend is half-vampire Cat Crawfield - and she has already lost more than the average human could bear. But her family's dark past is wrapped in secrets and shrouded in darkness - and a demon shapeshifter has marked Denise as prey. Now her survival depends on an immortal who craves a taste of her.

He is Spade, a powerful, mysterious vampire who has walked the earth for centuries and is now duty-bound to protect this endangered, alluring human - even if it means destroying his own kind. Denise may arouse his deepest hungers, but Spade knows he must fight his urge to have her as they face the demon nightmare together...

Because once the first drop of crimson falls, they will both be lost.(Summary from Goodreads.com)

I've been dying to read this book!And now that i've finished it,i can't really understand why it took me so long to buy it!
Jeaniene's Frost first novel in the Night Huntress world,just left me wanting for more.I think this writer can take any character and create a truly fascinating story around him!And maybe that is because in the first place she created even the side-characters of the Night Huntress series so well,that now,all she has to do is give those characters the voice to tell their stories.At least that's how i feel about Spade and Denise.Those characters had a minor role at the Night Huntress series but their lifestory was there.We knew about Spade's troubled past and that he had lost a woman he loved but not the details.Same goes with Denise.So in First Drop of Crimson,along with a new story,we get to know all the details about them plus,a glimpse on Bones and Cat that i personally have missed!
I can go on and on about how i liked this book,the romance was steaming,there were enough twists in the plot to make you turn the pages until late in night but i want to add a small complaint as well... I was so accustomed to the action packed scenes in the Night Huntress series that in this novel i missed them.There wasn't just enough action... And when finally Cat and Bones made their appearance i thought "at last,now's the time for action!" but no,the couple of action scenes in this book were abruptly cut.When i finally thought that at last i'll see some action,everything was set quickly and with little details something that it was in complete contrast with Cat and Bones's stories.Ok i know that this is a different book,so one can not expect the same things but i was so used to those action scenes that i found myself missing them.But apart from that,i was thrilled!
Now,i'm just blaiming myself that i didn't order Eternal kiss of Darkness as well!Cause once you get started with Jeaniene's Frost novels you just can't stop!At least i know i can't!And i'm crossing my fingers for a stand alone book with Vlad!
Posted by Unknown at 11:04