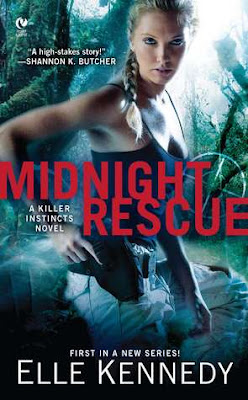 Abby Sinclair had a desperate childhood until she was rescued and adopted by a retired army ranger who molded her into a master of self-defense. Now, she's a cunning and fearless assassin thrust into assignment after dangerous assignment, using everything she has-nerve, resilience, strength, sex-to come out on top. Her only rule: trust no one.
Abby's latest assignment is in Columbia: go undercover and snuff out a dangerous arms dealer active in the underground sex trade. But when Abby purposely blows her cover in a last-ditch attempt to free the helpless victims, deadly mercenary Kane Woodland is recruited as back-up. His mission: get Abby out of that hell hole.

The last thing Kane expects is to feel a primal attraction for Abby. But when she convinces him to join her on her perilous mission, their newfound passion could put the lives of their whole team at risk.


Midnight Rescue was a surprise for me! Not because I wasn't expecting it to be good, but because I was afraid to pick a romantic suspense book after all my mediocre choices within this genre over the past months. And I'm glad to say, that finally, I got a book that warmed me up to the genre again :)

Reading their story, was fascinating! I always like my heroes to be a little tortured, not because I'm some kind of sadist but because those characters, present certain challenges and have more interest in seeing them overcome their personal problems and pursue their HEA. And Abby is certainly one of those characters with her past. The nightmare she had to live through has deeply affected her in the present, the way she perceives human interaction and sexual relationships. Seeing her overcome all those issues and getting close to Kane was beyond interesting. And Kennedy did an excellent job in describing and building her character. Abby is one of the strongest female characters I have ever encountered.

Kane on the other hand, is your typical alpha hero to drool all over, I enjoyed reading about him, but his character development wasn't so great as Abby's. Sure, Kennedy did a splendid job building not only her main characters, but the secondary ones as well, but I think that Kane needed a little bit more work.

And now that I mentioned the secondary characters, I just have to say it. One of the best things about Midnight Rescue is how along with the main story, Kennedy explored, more than I expected, the story of some of the secondary characters making me feel at times that I was reading not only Abby and Kane's story but Isabel and Trevor's as well. Their story was a great addition in an already great story, spicing things up even more and wetting my appetite for the future installments in this series. I mean Isabel and Trevor intrigued me. And I want to read their story like right now :)

The plot was full of action and twists, the villain was a psychopath like many others out there, but the whole setting, the description of the "final battle" and how they saved those girls at the end was genius and kept me at the edge of my seat.

All in all, Midnight Rescue is a great military romance title that I devoured in one sitting and I can't wait to get my hands on the next books in this series. Totally recommend it.