REVIEW: His Very Own Girl by Carrie Lofty


His Very Own Girl by Carrie Lofty 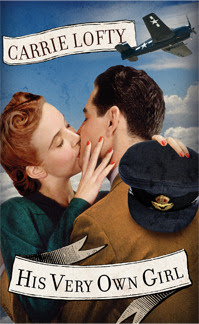 After the War took the lives of Lulu Davies’s parents and her fiancÉ, she promised herself she would guard her heart carefully and concentrate on her great love—flying the biggest and best airplanes in the sky. Lulu is a pilot in the British civilian air force, ferrying planes around Great Britain and keeping her eye on a coveted spot in a training program for world-class pilots. She’s perfectly content to strive for greatness in the skies, and dance with a few GIs on the way.

Brawny, quiet American medic Joe Weber signed up with the paratroopers to escape his checkered past; he’s hoping that jumping out of planes and patching up soldiers will earn him respect and a hopeful future. Joe’s first real test of medical skill is on a pilot whose plane takes a hard landing in a training field; after rushing to the crash scene, he is stunned to come face-to-face with a gorgeous Rita Hayworth lookalike. And when the two cross paths at a dance hall a couple weeks later, he can’t resist the urge to find out more about this spirited, dark-haired beauty.

Their flirtation breaks all of Lulu’s rules, but dance by dance, week by week, walk by walk, she finds herself falling in love with this honest, vulnerable man on the run from his demons. But as Lulu and Joe’s undeniable attraction gains momentum, World War II steadily intensifies toward D-Day. The lovers only have one night together before Joe is transported to France for the Battle of the Bulge, where his skills and his instinct for survival will be pushed to their limits. Lulu distracts herself with flight school and the friendships of her colleagues, but she can’t get the handsome medic out of her head. Only time and hope will tell if her love will return unharmed from War, and if the two will be able to overcome their pasts to form a beautiful life together in peace-time.


I don't think that in my review of His Very Own Girl I'll say about Carrie Lofty something that I haven't already said. The woman is brilliant! Simple as that. It's not that her stories are always amazing (which they are) or perfect or I don't know, it's the fact that as an author, Carrie Lofty has that certain quality that defines her, that separates her and her writing style so that you could probably recognise her work, without knowing that it belongs to her.

His Very Own Girl is to this day, my favorite book by the author. As far as historical romances are concerned, this story is my first set in World War II and let me tell you it was incredible!

Personally speaking, World War II fascinates me and interests me like nothing else does. As a kid I would search and find anything that had to do with that period, from novels to documents but whatever I have read to this day is mostly from Greek history. I haven't read much about other countries along that time, and nothing about English history. So His Very Own Girl first and foremost satisfied my inner geek. It's so well researched and Lofty does a splendid job touching and communicating to her readers the feeling of that time that apart from enjoying myself with an excellent story I could actually learn a thing or two.

Carrie Lofty manages to capture the essence of that time period, the feelings, the way people lived, hoping for everything and nothing at the same time, enjoying what they could, while they could, including human relationships. Lofty managed to make her readers see and feel exactly how her heroes feel and what motivates their actions. It's not that this ability of hers as an author wasn't evident in her other stories, but in His Very Own Girl, I think she surpasses herself!

I won't tell much about the story. The premise is very informative and believe me, you don't need to know anything else to fall in love with this book. The amazing writing style, the character development and the setting will do the rest!

Lulu is one of my favorite characters, strong, independent the way Carrie Lofty always writes her heroines. She's not the damsel in distress waiting for her perfect hero to save the day. She's a woman of her own, ready to save the day and do whatever she can for what she believes just.

Joe on the other hand is the tortured hero you can't help but love and hope the best for him. Together they make an explosive couple the reader can identify with and care for.

The plot is evenly paced, full of action scenes and romantic ones along with some others that help you get the feeling of the time and compliment the whole story beyond imagination.

The secondary characters are well developed, as are the main ones, and in overall, there's nothing bad I could say about this book, even if I tried.

All in all, His Very Own Girl is a historical romance, no fan of the genre should miss and Carrie Lofty, one of the best authors you can find out there. She just has that remarkable ability that transforms normal stories to something extraordinary.

*This title was reviewed via Edelweiss
Posted by Unknown at 17:53