Whitney, My Love by Judith McNaught 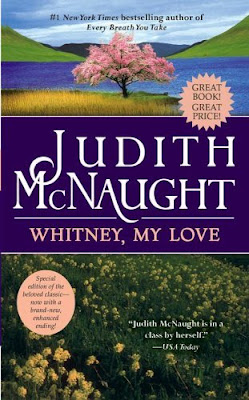 "Whitney, My Love" stands as Judith McNaught's timeless bestseller -- a novel so rich with laughter, tears, and the power of dreams that millions of readers have returned to it again and again to savor its beauty and majesty.

Under the dark, languorous eyes of Clayton Westmoreland, the Duke of Claymore, Whitney Stone grew from a saucy hoyden into a ravishingly sensual woman. Fresh from her triumphs in Paris society, she returned to England to win the heart of Paul, her childhood love . . . only to be bargained away by her bankrupt father to the handsome, arrogant duke. Outraged, she defies her new lord. But even as his smoldering passion seduces her into a gathering storm of desire, Whitney cannot -- and will not -- relinquish her dream of perfect love.

You can't possibly believe how sad it makes me to say so, but unfortunately, Whitney, My love, was not the book for me. Honestly, I can't say I liked it or understand what the fuss is all about this book. And for me to say that I didn't like a book written by McNaught, whose work I simply adore, means a lot, believe me.

First of all, let me say that this book is written in the exquisite way only McNaught can achieve. The way this author can evoke such emotions in her readers and make them care for her characters and "live" through them is simply amazing. Her books are full of details, you don't just get a simple love story, her characters always suffer through many disasters before finally achieving their HEA and that is what makes her books so special for me. But Whitney, was just too much for me I'm afraid. All those misunderstandings, plus a couple of provoking scenes were too tiring for me. By a certain point I was thinking "enough with all those betrothments and misunderstandings, just talk to each other and let's be done with it some 100 pages or so sooner".

But let's get things from the start. From the very first pages of this book, I just couldn't bring myself to like Whitney. I just couldn't. She was too manipulative, too naive, too proud and for all her pride and rebelliousness, she submitted far too easily too all the things that mattered. I mean I can't believe how a girl who defied everyone since her childhood , could possibly forget all the atrocities she suffered so quickly... I just can't. But apart from that, from page one, I just knew that Whitney wasn't my kind of character for various reasons. I like my heroines independent and strong and not too submissive, but for lack of a better word, Whitney was too much of everything. Everything has a limit, and Whitney occasionally met no limits or boundaries whatsoever.

Clayton, for the better part of the book was an indifferent character for me. That is, up to a certain point, where from there, I didn't like him either.
Before I started reading this book, I had only heard the best about him, that he is that nice mix of bad boy and savage that will definitely melt me from the inside. And that was what I expected of him. Only to be very, very disappointed...
For the better part of this story I couldn't care less for him, I couldn't understand why on earth he went into such lengths to get Whitney and why he did all those things. I get it, Whitney was a really beautiful woman, but it's not my kind of thing when a man pursues a woman only because he is fascinated by a beautiful face and body. And throughout the whole book, Whitney wasn't much more that just a really gorgeous girl. So, I just couldn't understand why he kept forgiving her all those things and tried to flirt her in such a way.

And now, on to those two provoking scenes of the story. The one with the crop and the other with the rape. I wasn't provoked or offended by either of those scenes, but I was offended by the way Whitney reacted to both of them. Especially the rape. And in case you're wondering, Clayton's character wasn't ruined for me by those two actions of his. He was ruined because he was so eager to jump to assumptions and somehow I felt that he reacted so savagely just to get a reaction from Whitney.

Anyway, Whitney My Love, was not the book for me, but it is the favorite book of many readers out there. I'm at the minority of those who didn't fall in love with this story, so probably, there were things in it I failed to see. So I won't say if I recommend this to anyone or not. Surely it's not a book I will ever re-read but for so many people to love it, it must have something. So just read it and judge for yourselves. After all, Judith McNaught's writing style guarantees that you will at least enjoy yourself while reading it whether you like the story or not.