READING: It Happened One Autumn (Wallflowers,#2) by Lisa Kleypas 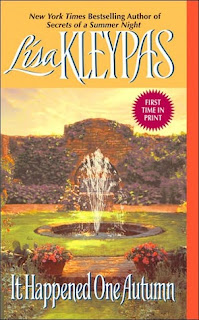 It Happened at the Ball...


Where beautiful but bold Lillian Bowman quickly learned that her independent American ways weren't entirely "the thing." And the most disapproving of all was insufferable, snobbish, and impossible Marcus, Lord Westcliff, London's most eligible aristocrat.


It Happened in the Garden…


When Marcus shockingly -- and dangerously–swept her into his arms. Lillian was overcome with a consuming passion for a man she didn't even like. Time stood still; it was as if no one else existed…thank goodness they weren't caught very nearly in the act!


It Happened One Autumn...


Marcus was a man in charge of his own emotions, a bedrock of stability. But with Lillian, every touch was exquisite torture, every kiss an enticement for more. Yet how could he consider taking a woman so blatantly unsuitable…as his bride?

It Happened one Autumn is so much better than the first book in the Wallflower series and a book that made me see exactly why this series is so popular.To say that I enjoyed this book,would be an understatment,try being excstatic about it and you should get the picture!
From the first book in the series,I had already picked up Westcliff's interest towards the eldest Bowman sister and to be honest,since I loved those two characters from that book,I was almost certain that their story couldn't disappoint me!And it didn't!It Happened one Autumn is among my favorites of this genre!
Lillian and Marcus possess that something in their characters that makes them so believable and their reactions to things so true that you can not but love them!Both of them are strong,independent and stubborn and the romance between them presents such an interest that I couldn't put this book down until I finished it!They are so similar that a relationship between them should had been impossible but yet,they manage to fill each others needs.
It's not that I've read so many historical romances,but untill now,all that I've read,follow the same pattern more or less,flirt,marriage,sex and then something final to bond the couple together forever beyond marriage.But in this one,this pattern is broken,and I must admit I found it a bit refreshing!Plus,the ending is just suspensfull and perfect!The last 30 pages or so,was plainly impossible for me to leave this book of my hands!
I'm just glad that everyone who told me that this series gets better by each book were proven right and I just can't wait to pick up the next book in the series!