Interview with Augusta Blythe and Giveaway of Winterborne! 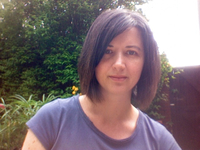 Today I'm really delighted to welcome Augusta Blythe,author of Winterborne, book one in Unbound Universe series,for an interview here at my place!I've read Winterborne,courtesy of the author herself,and I was more than pleasantly surprised with it!It was an amazing book and I just can't wait to read the second in the series!You can check my review of Winterborne here.
So,Augusta was really kind to accept my interview request and not only that,but she also gives an e-copy of Winterborne to a lucky winner!
But before anything else,I want to welcome Augusta!


- How did you decide to become an author?
I wanted to be an author before I understood the meaning of the word.  I was telling made-up stories in nursery school (ages 3-4) and by age 10, I was writing poems about each of my classmates that my teacher, Mrs. Roberts, used to decorate her classroom.  Some teachers were more indulgent than others.


- Becoming an author was a childhood dream?
Yes.  I took a few detours, but I eventually found my way.  I sold ads for magazines in New York and Los Angeles, became a lawyer and worked in Philadelphia, then moved to England.  I continued to write during those years, mostly screenplays though.


- How did you decide to become a self published author?What are the advantages?
I've sent query letters for various books over the years.  I followed all the rules, researched every agent before I queried, and wrote what I still think are good, strong queries, but no one wanted to read the book.  Rather than let them collect dust on my hard drive, I decided to self-publish one to see how it stood up in the marketplace.  I hired an editor, my brother-in-law designed my book cover and have gone from there.  The main advantage is that my book is out there to be read by anyone (with an e-reader) who's interested rather than dying a slow death on my laptop.


- Which place in the world are you dying to visit?
The Galapagos Islands, although it sounds like increased tourism there is a threat to the very things people come to see.  Oh, the cruel irony.  My son is six and obsessed with animals -- endangered animals, the evolution of animals from other animals.  He's a budding naturalist and it's rubbed off on me.


- What are your plans after Winterborne?
I always have half-completed works lying around.  Right now, I'm trying to stay the course and finish book 2 of the Universe Unbound series.  I've already outlined book 3.  I'm also in the middle of a YA dystopian that I started a while back and then got distracted by publishing Winterborne.


- How many books will be in total in the Universe Unbound series?
At the moment, I'm thinking that I'll have three books with Loie as the narrator and then pass the baton to someone else.  It's a character I briefly introduce in Book 2.  I wrote another book with this character and similar ideas about human evolution that probably won't see the light of day.  I really liked her voice and would like to see how she fits in as narrator, but that plan can change so I'm being deliberately vague here.


- What inspired you in writing Winterborne?
In general terms, I wanted to explore the idea of identity and how kids get labeled as one type of person and it tends to stick with them for life.  I know a lot of adult women who still suffer the same low self-esteem they had as teens and it's incredibly sad.  I wanted to write something that allows these girls to break out of their stereotypes.  Mia and Loie are acting out their 'assigned roles' until Andreas enters the picture.  More specifically, some of the things in the book are based on real experiences.  I have a history of being chased by large black birds (it's a family joke).  I once rode my bike through a park in the dark and nearly got mowed down by running deer.  In a parapsychology experiment for my eighth grade science class, I saw the piano markings on the pencil that my father was trying to transmit telepathically.  I still have the pencil.  Sadly, no superpowers, though.


- Do you have any plans or ideas after the complition of Universe Unbound about another series?
Maiden Voyage, my YA dystopian, will be a stand-alone.  I'm targeting Spring 2012 for its publication at the moment, but we'll.  I had written a modern take on Sense & Sensibility for YA, but I've just read about another book that's been sold for publication with the same idea in the same genre so I'll likely shelve that one.  After that, we'll see where my head is.


- Well,I'm mostly curious myself right now,but is Winterborne going to be in paperback fornat?
If I sell enough ebooks, I would love to pay to get Winterborne in paperback.  It's more expensive than putting together an ebook and, based on my research so far, hasn't been cost-effective for self-published authors.  Most of their sales seem to be ebooks, even with a paperback option.


- What is the part you enjoy most while writing?What is the one you least enjoy?
I love being immersed in the moment and I love writing dialogue.  The part I least enjoy is having to wrench myself out of the world I'm imagining in order to do laundry or make dinner.


- What is your favorite genre to read and could you share one of your favorite books/authors?
I enjoy speculative fiction, magical realism, urban fantasy.  My favorite authors are Margaret Atwood, Jonathan Carroll (not mentioned enough, IMO), and Jane Austen.  The Blind Assassin is an all-time favorite.  Sense & Sensibility is the younger, less popular sister of Pride & Prejudice but it's my favorite by Austen.  They're not YA authors, but there's no reason their books can't be enjoyed by teens.  I had read my parents' entire wall of books by the time I was ten and that includes the encyclopedias, Stephen King novels and the John Jakes collection.  Needless to say, my parents did not monitor my reading habits.


- Do you ever plan on writing anything for adult audiences?
I've already written two adult books that I don't think I will self-publish.  I suspect I will write another one down the road.  I've written seven screenplays, all for adults, and have placed in the Nicholl Fellowship competition so I definitely have stories in me for an adult audience.  Also, I think it's worth mentioning how many adults read and enjoy YA.  Winterborne, so far, has been enjoyed by a complete mix of ages.
- Do you have some advice to any aspiring authors out there?
Trust your instincts and try not to doubt yourself, even when everyone else does.
Thank you Augusta for your time here!
Winterborne Giveaway 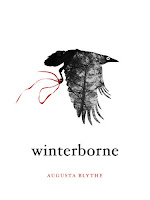 As I promised you,Augusta Blythe is giving away an e-copy of her book to one lucky winner!
Guidelines
~ As this is an e-book the contest is open internationally!
~ You must be 13 years old or over to participate.
~ The winner will be chosen via Random.org
~ Being a follower isn't required but it's always appreciated!
~ You must submit your enter using the link in the end of the post.Comments are welcome and higly appreciated but do not count as an entry.
~ The prize is submitted by the author and I have no responsibility whatsoever over it.
~ The contest will be open until June 30th
~ The winner will be notified via e-mail and will have 48 hours to confirm his/her e-mail address before a new winner is selected.
Follow the link below to enter
~Winterborne by Augusta Blythe Giveaway~
~CLOSED~
Posted by Unknown at 17:20