Winterborne by Augusta Blythe
Publication Date: April 24th 2011
Publisher: Self-published
Kindle Edition
Buy via Amazon
You can also find Winterborne at B&N and iBookstore and it's  available on Sony and Kobo via Smashwords 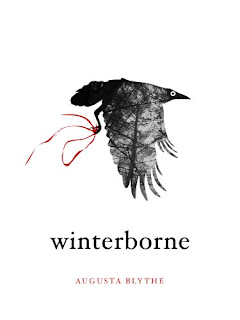 Sixteen-year old Mia Winterborne is destined to be special. Details are sketchy, though, as her dad disappeared with all the answers when she was five. Mia only knows that she'll inherit her kickass superpowers on her seventeenth birthday. Helping Mia prepare for her anticipated ascendancy is Loie Bryce, her best friend and eternal sidekick extraordinaire. The girls' intense friendship has never wavered until now, when Andreas arrives in Salcey Ridge. They both fall hard for the British hottie, who quickly becomes a fixture in their lives. When they discover that Andreas is not who he appears to be, the frightening reality of Mia's powers finally hits home. The nearer Mia's birthday draws, the more the danger escalates and long-buried lies are exposed, putting the girls on a path that they never expected.

Before saying anything else about Winterborne I really want first to thank the author,Augusta Blythe,for approaching me and for giving me the chance to read her book.
That being said I can now proceed and express my amazement with Winterborne!It's a book I didn't just like,I devoured it!Once I started reading it I just couldn't possibly put it down!
Where should I start?From the incredible and unique story building?From the amazing Augusta Blythe's writing style or the set of characters she created that had just depth and development?In overall,Augusta Blythe delivers a YA story so good that the reader can't help but feel mesmerized until the very last pages.
At first,I was a bit surprised that the narrator was Loie Bryce rather than Mia Winterborne.Having read the premise I just assumed that Mia would be the narrator,but Blythe surprised me and in a very pleasant way.Cause Loie is just perfect a character!
I loved the way Blythe portrayed her protagonist and the way she sketched her feelings.It was fascinating to watch in real time how Loie felt towards certain situations and how different things started to change her view of the world and the people surrounding her bit by bit each time.
She starts as being the third wheel - as she refers to her own self - to rise above all her problems and drawbacks to a memorable character.At this point,I have to admit that I didn't like Mia nearly as much as Loie...She had certain qualities in her character and there were some things I admired about her but she was rather self centered for my taste...And the way she treated Loie at times just struck a rather sensitive spot in me.I didn't like the way she treated her,like everything was evolving around her and Loie was good only to frame her awesomeness.But as I said,she had certain qualities that redeemed her more or less by the ending.
As for the hottie of the story Andreas,let's just say that he is a well justified reason for both Loie and Mia to fight for his attentions!Don't take me wrong,I value friendship more than anything in the world,I just say that I could totally relate to both of them for falling for him!And to be honest,only the British accent would do the trick for me!Apart from that,Andreas is as a well developed character as everyone in this book,and by the end of the story I was both frustrated with him and at the same time I could appreciate him more by his actions.I know I don't sound really coherent right now,but I can't say anything more,to avoid giving away much of the story.
Winterborne is trully a book I totally recommend.It's action packed,fast paced and so well written that time flies by while reading itThe world Augusta Blythe created is unique,dark and creepy but gorgeous nonetheless.Even if I tried I wouldn't be able to find a single thing I didn't like.All in all a book that goes straight to my favorites shelf and one I can't wait to read its sequel!