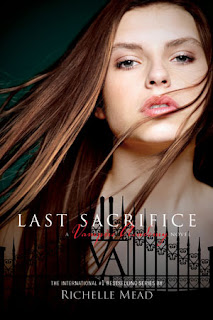 Rose Hathaway has always played by her own rules.


She broke the law when she ran away from St. Vladimir’s Academy with her best friend and last surviving Dragomir Princess, Lissa. She broke the law when she fell in love with her gorgeous, off-limits instructor, Dimitri. And she dared to defy Queen Tatiana, leader of the Moroi world, risking her life and reputation to protect generations of dhampir guardian to come.


Now the law has finally caught up with Rose- for a crime she didn’t even commit. She’s in prison for the highest offense imaginable: the assassination of a monarch. She’ll need help from both Dimitri and Adrian to find the one living person who can stall her execution and force the Moroi elite to acknowledge a shocking new candidate for the royal throne: Vasilisa Dragomir.


But the clock on Rose’s life is running out. Rose knows in her heart the world of the dead wants her back… and this time she is truly out of second chances. The big question is, when your life is about saving others, who will save you?

At last,the final installment of Vampire Academy series got in my hands and i couldn't be more excited about it!
Having read it,i'm left with a bittersweet kind of feeling!
I loved Richelle's Mead world and to be honest i didn't want it to end...The fact that a spin off series is on the make is something, definitely,but i don't think it would be like Vampire Academy.And not because it won't be that good.There's no way i know it that just yet and it's most certain that i will read this series as well.It's just that since i already know this world and the characters more or less,it won't leave me with that feeling of amazeness you get once you get in your hands something that's really good and unique in many ways.And that is what this series was for me.An amazing and unique series with a cast of memorable characters!
But let's stop beating around the bush and get straight to the point...Last Sacrifice was good,really good!I couldn't put my hads off the book,each time i had to stop reading i was actually experiencing a feel of deprevation,that's how i loved this book.Evenly paced,mysterious filled and i must say once more that i love the way Mead handles two worlds simultaneously.We've seen it before in Vampire Academy were Rose was in Siberia,in her other series Dark Swan as well and in Last Sacrifice that ability is yet again evident.Mead handles delicately the transitions between Rose's and Lissa's adventures and the reader is never in loss.Rose may be away from Lissa but still,we get to know every huge thing that happens to her.The only difference in this book is the fact that since there were many things to say and many things to be done for this story to end,some characters that were in previous books much more active,in this one were more or less absent.Christian was definitely one and Adrian another.But i don't complain...With so many things going on it was either that or a book that long that would lose it's essense i'm afraid.So, no complaints here whatsoever.
Before i continue,i must note that from here under there will be spoilers in my review.I hate to include spoilers in any review i write but i'm afraid that in this case i must make an exception.
As i said,i really liked this book,but some things just held me from being completely amazed with it as i was with the previous books in this series.Maybe it's the fact that Richelle Mead has really spoiled us,delivering books that never cease to amaze you and i just kind of awaited that Last Sacrifice would have that something that would take me over the edge.For one thing,Last Sacrifice,for all the hunting and suspence it definitely had,was no action filled at all.No battle,no anything.And let's be honest,that was something we all kind of waited in the last installment of this series.But no.And although i didn't actually feel that the book was lacking in any department i kind of awaited for a battle of some sort.
Also,what happened to Rose or Dimitri?Dimitri especially was not himself at all!We got to know him as a badass combat god but in Last Sacrifice was more of a puppy.And i swear if he continued for long with that attitude that he would do whatever Lissa wanted him to i would be seriously freaked out...Fortunately he didn't but only to find himself apprehensive towards Rose for any other reasons...Anyway,i wanted to read about a Dimitri like he was in those first books of the series and not about a that much changed Dimitri but ok.It's Dimitri,so i take him as a favorite character anyway!
Lastly,Both Lissa's sibling as well as Tatiana's murderer were a bit of surprises...I kind of knew the murderer after a point but still it was a surprise and despite the motives...well,i kind of hoped for someone else.Anyway,the book leaved many things just hanging there but since Richelle Mead says that this happened as kind of an introduction for the spin off series,i take her word for granted and wait to see how things will evolve then.
All in all,Last Sacrifice was not my perfect ending in all ways,but a happy ending nevertheless for pretty much everyone...And those characters that were left without closure i guess will have to continue their story later.The bittersweet feeling i was left when i finished the book though,was more because i was sad to see this series end and less because i expected anything else of this book.After all,if a writer wrote whatever the readers expected that would hardly make him a succesfull one.And no matter what,Richelle Mead is one of the best authors out there!