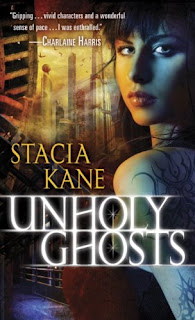 THE DEPARTED HAVE ARRIVED. The world is not the way it was. The dead have risen, and the living are under attack. The powerful Church of Real Truth, in charge since the government fell, has sworn to reimburse citizens being harassed by the deceased. Enter Chess Putnam, a fully tattooed witch and freewheeling ghost hunter. She’s got a real talent for banishing the wicked dead. But Chess is keeping a dark secret: She owes a lot of money to a murderous drug lord named Bump, who wants immediate payback in the form of a dangerous job that involves black magic, human sacrifice, a nefarious demonic creature, and enough wicked energy to wipe out a city of souls. Toss in lust for a rival gang leader and a dangerous attraction to Bump’s ruthless enforcer, and Chess begins to wonder if the rush is really worth it. Hell, yeah.From the Paperback edition.

Unholy Ghosts... is different from whatever i expected!Maybe the best and more hardcore urban fantasy book i've ever read!Stacia Kane created an amazing,though a bit confusing for me at times world that sucked me in from the very first pages of the book.
I must admit,i had a bit of a problem with the language that is used here.English isn't my native language and at first i found it hard to understand the slang that is being used,especially at the dialog parts.But after a while i got used to it and more or less i understood what was going on.But the language was a small problem and to be honest,i don't know if the world building was indeed so confusing or i just failed to understand it especially at the beggining.Kane surely created a dark and violent world almost post apocalyptic.I loved that exact fact!I enjoyed the chilling and sometimeds gruesome descriptions and even the cast of anti heroes rather than heroes that she picked.The main heroine,Chess,is a drug addict,Church employ.What is Church you might ask.Church is somekind of a new religion,or rather something like a governement,since religion doesn't exist in this story,that just believes in facts and expects of all people to believe in that too.In a world were all religious teachings failed big time,all that is left is a strict belief in facts.Ghosts are vicious entities,killing people and Chess's job is to banish those ghosts in the name of Church.The world structure is really more complicated and to be honest i couldn't exactly understand how the ghosts killed people but somehow that didn't make me like any less the book.
As,it didn't make me like it any less the unusual gathering of protagonists...As i said the main heroine is a drug addict,the hero the chief reinforcer of a drug dealer and the third part a rival gangster.An unusual cast don't you think?But they fit exactly in this world.I was annoyed by Chess's excess use of drugs,cause i want my heroes strong willed but at the same time i cared about what happened to her and i even liked her for her sympathy.In the end of the day,i think that Chess has a lot more to show as the series proceeds and i just hope she'll quit drugs.I don't want to start an ethical discussion about drugs using and i believe that that wasn't the author's intention either.It's just the way she created her world...
Terrible on the other hand,the main hero,is unlike any other male protagonist i've ever encountered...Not your typical to die for guy,but huge and scarred,not only on the outside but on the inside as well.Although we don't get to learn more about his personal story in this book there are hints that more will come.
Finally Lex,is the rival gangster who has also claims on Chess.I can't say much about his character as he wasn't really developed and didn't appear in the better part of the book.I just know that i don't want Chess to end up with him...As you guess i'm already team Terrible!
The writing style was perfect...!Dark,creepy,chilly with amazing descriptions even if they were gruesome.The pacing was even.The parts were nothing happened were small and immediatelly after them followed some action filled scenes.I wasn't bored not even for a minute.
All in all,Unholy Ghosts is a really promising first book in a series that i most definitely continue reading.And any Urban Fantasy fan out there should give this series a chance.Believe me you won't be disappointed!