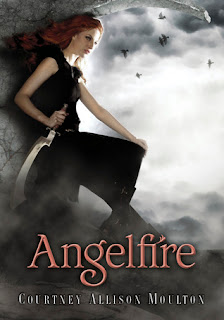 Angelfire by Courtney Allison Moulton
Publish Date:February 15th 2011
Publisher:HarperCollins / Katherine Tegen Books
Summary from Goodreads:
When seventeen-year-old Ellie starts seeing reapers - monstrous creatures who devour humans and send their souls to Hell - she finds herself on the front lines of a supernatural war between archangels and the Fallen and faced with the possible destruction of her soul.

While balancing her dwindling social life and reaper-hunting duties, she and Will discover Bastian is searching for a dormant creature believed to be a true soul reaper. Bastian plans to use this weapon to ignite the End of Days and to destroy Ellie's soul, ending her rebirth cycle forever. Now, she must face an army of Bastian's most frightening reapers, prevent the soul reaper from consuming her soul, and uncover the secrets of her past lives - including truths that may be too frightening to remember.
What i think:
It's no secret that i love angel stories and i'm so glad that lately after all those vampire and were stories,angels stories seem to become the next big thing!Angelfire in particular seems to be among the good ones!I just hope that it leaves up to its expectations and is indeed as good as its premise promises to be.
Posted by Unknown at 13:25