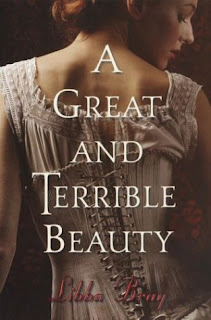 A Victorian boarding school story, a Gothic mansion mystery, a gossipy romp about a clique of girlfriends, and a dark other-worldly fantasy--jumble them all together and you have this complicated and unusual first novel.


Gemma, 16, has had an unconventional upbringing in India, until the day she foresees her mother's death in a black, swirling vision that turns out to be true. Sent back to England, she is enrolled at Spence, a girls' academy with a mysterious burned-out East Wing. There Gemma is snubbed by powerful Felicity, beautiful Pippa, and even her own dumpy roommate Ann, until she blackmails herself and Ann into the treacherous clique. Gemma is distressed to find that she has been followed from India by Kartik, a beautiful young man who warns her to fight off the visions. Nevertheless, they continue, and one night she is led by a child-spirit to find a diary that reveals the secrets of a mystical Order. The clique soon finds a way to accompany Gemma to the other-world realms of her visions "for a bit of fun" and to taste the power they will never have as Victorian wives, but they discover that the delights of the realms are overwhelmed by a menace they cannot control. Gemma is left wi! th the knowledge that her role as the link between worlds leaves her with a mission to seek out the "others" and rebuild the Order. A Great and Terrible Beauty is an impressive first book in what should prove to be a fascinating trilogy. (Ages 12 up) -Patty Campbell

A Great and Terrible Beaty is indeed a very beautiful story,not great,but certainly beautiful, of a young girl struggling to know herself and her place in the Victorian England.The story starts somewhere in India where the main heroine,Gemma,is witness to her own mother's death and soon after returns to England and a boarding school where all sort of strange things start happening.
I have to admit this book starts really slow.In the first half or so nothing significant happens.All we learn is about Spence Academy and life there,the girls Gemma meets there and the dynamics that are created between those girls.That first half was a bit boring and i had to struggle to keep on reading but i'm glad i did.After a certain point,the story picks up and although up to the end nothing huge happens,the mystery around things that happened in the past,as well as Gemma's attempts to know herself and her powers on her own,make the story really interesting.Granted,many things are left unanswered.But it's a story that has two more books until its closure,so i hope that on the next instalments those answers will come.
The characters in this book are quite interesting.The friendship between Gemma and Pippa and Felicity though is a bit strange.Gemma knows that those two are clearly selfish,spoiled girls and despite that, she trusts them.When her trust is betrayed,she just continues hanging out with them for reasons i just can't see myself.And not only that,but decides to confide in them her greatest secret and take them along in a journey that even herself doesn't know where it ends.Many things bothered me in that friendship and in those girls' behavior and in many points,the story focused more on that proclaimed friendship instead of more crucial points.
The atmosphere though in this novel is amazing.What with the academy and all the shadowy corners,the woods and the caves,Libba Bray delivers a story full of incredible images and a sense of mystery in the air that is almost touchable.But what i liked most,was the description of women' position at those years and that despite they all learned as soon as they were borned that they should be obedient and not care about anything else except for painting or serving tea,those girls tried to make a difference in their lives.They hoped that they could have a choice over their lives and started that liberation of mind rebelling against small and insubstantial matters,but in the end, all rebellions start over small things,to become huge.
All in all,it was an interesting book and i just have the feeling that the story gets even better,so i will most definitely continue on with the series,despite some things i didn't like in this book.

Email ThisBlogThis!Share to TwitterShare to FacebookShare to Pinterest
Labels: Libba Bray, Reviews, YA