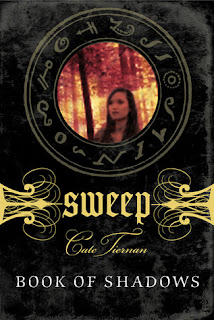 Morgan thinks witchcraft is laughable when her best friend Bree drags her to a meeting of the Cirrus Coven. But during a cermony led by Cal, Morgan's long-time crush, Morgan feels a shock. Suddenly everything looks brighter, clearer. Morgan doesn't want to get involved with witchcraft-but she feels like witchcraft is choosing her.

I liked this book quite a lot i have to say!It's the first YA book about witches and only witches i have ever read and it was quite fun reading it.Surely it was too small to be bored, so that's both a plus and a minus!It's a plus because you'll never get tired while reading it and the plot was quickly evolving and a minus because the ending was quite abrupt...I had reached the end and thought "What,there's nothing more?" .
I really liked Tiernan's writing style.She didn't go around the bush,just "dived" her readers immediately into the point of her book and i loved her main heroine Morgan.She was a well developed character no matter how short the book was and that's propably because the book was narrated from her point of view.I liked her internal conflict,the way she was fascinated by something new and in contrast to her previous beliefs,and ultimatelly the way she decided to make her own path and do what was important to her no matter the obstacles.I also loved Bree...Don't mind me,i know she was a total manipulative bitch but i thought she was a nice addition in the book and to be honest i think that with Bree there's more than meets the eye.
I liked the fact that although a YA book,Tiernan didn't choose as her main setting the school area,in fact the scenes taking place at school where few.I found it quite refreshing among all those books where everything seems to happen in school area only.
What i didn't like though,was the ridiculously long number of names mentioned.I mean for such a small book to mention that many names it was,at least,confusing.Especially at the beggining i thought i might want to right down all those names in order to remember who is who and if i decide to pick up the sequel some months later i know i will definitely have a problem to remember everyone.Also,the way Cal tried to create his coven was a bit disturbing...It remind me of someone who's trying to manipulate you and change your beliefs,which is kind of what he wanted to do,but Wicca is supposed to be something good not evil and the way he tried to create new Wicca followers definitely reminded me of someone who's up to something bad.Lastly,i didn't like the religious implications in this book,not because i am a religious fanatic,rather than i find it a bit risky to touch those issues in a YA book.
Anyway,to sum it up,it was a fun read and i'll certainly continue with the sequel.