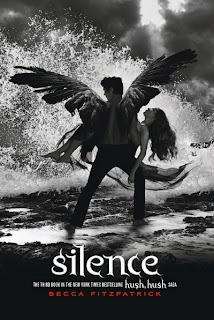 
Summary
The noise between Patch and Nora is gone. They've overcome the secrets riddled in Patch's dark past...bridged two irreconcilable worlds...faced heart-wrenching tests of betrayal, loyalty and trust...and all for a love that will transcend the boundary between heaven and earth. Armed with nothing but their absolute faith in one another, Patch and Nora enter a desperate fight to stop a villain who holds the power to shatter everything they've worked for—and their love—forever.

The cover of Silence,the third installment in Becca Fitzpatrick's Hush,hush series is finally out!!!What do you think of it?
It follows the same pattern as the previous covers in this series do,with the silver and black coloring.I like that this cover has also the same dynamic and motion with the previous.
I can't wait for Silence to get published!
Posted by Unknown at 19:22