Waiting on Wednesday: The Goddess Test 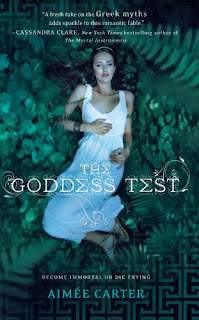 The Goddess Test by Aimee Carter
Publication Date: April 19th 2011
Publisher: Harlequin Teen
Pre-Order via Book Depository
Summary from Goodreads:
It's always been just Kate and her mom--and now her mother is dying. Her last wish? To move back to her childhood home. So Kate's going to start at a new school with no friends, no other family and the fear her mother won't live past the fall.

Then she meets Henry. Dark. Tortured. And mesmerizing. He claims to be Hades, god of the Underworld--and if she accepts his bargain, he'll keep her mother alive while Kate tries to pass seven tests.

Kate is sure he's crazy--until she sees him bring a girl back from the dead. Now saving her mother seems crazily possible. If she succeeds, she'll become Henry's future bride, and a goddess.

If she fails...
What i think:
Lately, the books that evolve around Greek myths are becoming more and more.And The Goddess Test in particular seem to be among the most interesting ones out there.The cover art is beautiful and along with the interesting premise,this book is among those i'm dying to read this year.