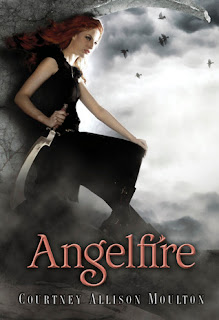 This debut, the first novel in a trilogy, is achingly romantic, terrifying, and filled with blistering action.

When seventeen-year-old Ellie starts seeing reapers - monstrous creatures who devour humans and send their souls to Hell - she finds herself on the front lines of a supernatural war between archangels and the Fallen and faced with the possible destruction of her soul.

While balancing her dwindling social life and reaper-hunting duties, she and Will discover Bastian is searching for a dormant creature believed to be a true soul reaper. Bastian plans to use this weapon to ignite the End of Days and to destroy Ellie's soul, ending her rebirth cycle forever. Now, she must face an army of Bastian's most frightening reapers, prevent the soul reaper from consuming her soul, and uncover the secrets of her past lives - including truths that may be too frightening to remember.

Angelfire is a book I thoroughly enjoyed reading!From the first until the last page it was among those books that constantly surprised me in a good way and a book I couldn't stop reading till I reached the very last page.
I have said quite a number of times that I have a soft spot for angel stories.I've read books about angels that weren't something amazing and just because the story was about angels I just loved them.Angelfire isn't among those books.Moulton would succeed in writing an interesting story regardless the main theme.
The writing style is fresh and away from the typical cliches you usually find in books with such a popular theme.
For one,the romance was there from day one of the story but it bloomed slowly,something that gains much points of appreciation in my mind.Despite the fact that Ellie reincarnates every few years and knows Will for many centuries the romance is as fresh as the turns in their relationship and the changes in Ellie's personality.Moulton didn't use reincarnation as an easy way to make her heroes fall in love easily.Quite the opposite... As a result,the romance is more believable and one of my favorite aspects in this book.
Ellie is a well built character and the reader gets to know more about her and about the whole world building along with her.Will is yet another strong but with his own problems male protagonist,yet in many ways he manages to stand out and make you remember him.
But the thing I enjoyed the most was Moulton's ability to write the action scenes.Angelfire is full of action scenes almost from the very beggining of the book and Moulton's ability to describe those is brilliant.The battles are almost coming alive thus making this book appealing to any urban fantasy lover.I just loved those scenes!
I also loved the ending scene.Usually I just don't remember anything about the exact ending scene of a book except if it's a cliffhanger.But Angelfire ended in a really memorable way at least for me.It was almost like a movie scene.I got a Matrix feeling with the way Ellie gave the last battle of this book and I couldn't help myself but smirk with the lines.
All in all,Angelfire is an amazing debut novel and I can't wait to see how the story progresses and what more can Moulton do in the sequel!