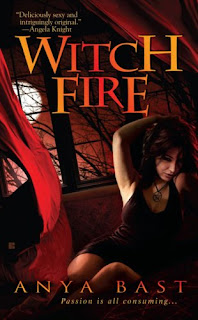 After a chaotic marriage and a rough divorce, all Mira Hoskins wants is stability and normality. But when sexy Jack McAllister enters her life, she discovers that what you want isn't always what you need.


Jack is a powerful witch with the ability to command fire and is anything but normal. As the head of a security detail for The Coven, a national organization that governs national witches, Jack has been assigned to watch over Mira. She is a natural born witch with the ability to call the air. And although she is unaware of her talent, a group of renegade witches has discovered her existence and are determined to steal her power--and her life.

My thoughts about Witch Fire by Anya Bast actually sum up in only just a sentence: "I was really dissapointed".That being said,finishing this book was a total miracle for me.Usually,when i don't like a book,i just skip it,but somehow with this one i kept reading,hoping that eventually it would get better.
It's the first book i read by Anya Bast and i picked it after some very high ratings i saw from friends and mostly,because the premise seemed more than interesting.But,it turned out to be something different from what i expected,thus,i couldn't get into it no matter how i wanted.
As i said,the premise is more than interesting.Heroine a girl with huge power who doesn't have a clue about it and hero your typical hot guy who goes to protect her.On top of that,she is an air witch,he, a fire witch and the combination between them promises to create sparkles!And the sparkles were created,don't mind me.The problem was that this book,had only sparkles.Oh, and lots and lots of sex...
I don't believe that i'm actually going to say that,but i was tired of reading about sex.Here,i said it!
The problem with this book wasn't definitely the writing style.It was very good.It wasn't the lack of a couple of characters you couldn't identify yourself in.The main couple was good.The problem was the total lack of plot.It was a rather small book,not even 300 pages and yet,i found myself reading about the couples' sex activities for about 10 pages or so each time and more than once.The sex scenes were,i have to admit,tastefully written,and if there was some actual plot apart those scenes i don't think i would have minded.But when all i read about in this book were the numerous ways Jack and Mira had sex,well,then there's a problem.At least for me.I don't mind some sex in my book or even lots of it,but i also want something more to keep me going through a book.And Witch Fire didn't have anythhing at all.Only maybe the substantial plot needed for filling the gaps between the sex scenes.
I really wanted to like this book and for it to be what the premise promised it to be.The potential was definitely there.The execution though failed to deliver a steamy,action filled book.It delivered though the steamy part!
As far as the characters are concerned,i really can't say many things.Mira and Jack were the only characters developed a bit and the rest of the cast was just there,ready to serve the continuation of the story when and if needed.To be honest,the book had lost me from the very first pages,when at page three a vibrator is mentioned,but as i said,i expected something else and so i actually finished reading it,something i'm really proud of to be honest!
Witch Fire just wasn't the book for me.If what you want to read is only an indeed well written romance with no focus in any elements of the plot then you might enjoy this book immensely.I, on the other hand want something more in my books,so i couldn't really like it.