Eligible for Descent of the Angels Reading Challenge 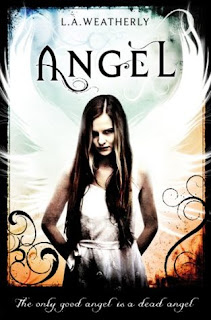 In a world where angels are beyond redemption, Alex thinks he's found one that might deserve mercy. Alex is a ruthless assassin - of angels. Forget everything you've heard about them before. Angels are not benign celestial creatures, but fierce stalkers whose irresistible force allows them to feed off humans, draining them of their vitality until there is barely anything left. As far as Alex is concerned, the only good angel is a dead angel...until he meets Willow. She may look like a normal teenager but Willow is no ordinary girl. Half-angel, half-human, Willow may hold the key to defeating the evil angels. But as the hunter and the hunted embark on an epic and dangerous journey and Willow learns the dark and terrifying secrets of her past, Alex finds himself drawn to Willow...with devastating consequences. Eoin Colfer reinvented the fairy, Stephenie Meyer reinvented the vampire, L.A. Weatherly reinvents the angel! This is a heart-pounding, knuckle-whitening, paranormal romance action-adventure for fans of the "Twilight" series. This is the first in a devastating new trilogy.

When i picked Angel by L.A. Weatherly,i have to admit that i kind of waited for a really good book.Having read it,i must admit that it was better than any expectation i had!
L. A. Weatherly's writing style is just amazing.I don't know if it's just me,but i found it fresh,even and incredibly good.English isn't my native language so, from times to times i have a problem with books,granted,most of the times i don't have any,but still...With Angel,i was there 100% and not because the writing style was that simple or easy.It was easily comprehensed,with a plot that is consistent and helps the reader follow.Angel is full of beautiful pictures, intensive emotions and good story,all of them woven into an amazing novel.
I loved the characters in this book.Both Willow and Alex are well developed and the romance between them believable.At last, in this book,the protagonists don't know in a miraculous way from the first seconds that the other is the love of their life.Surely,there's some interest,but the actual romance comes naturally and only until later in the book.Both heroes have their troubled pasts and even more troubled futures,and although they are together,they preserve their personalities.I loved the way Willow stood her ground when needed and the way Alex cared about her.I loved everything about those two!
One more thing i immensely enjoyed and found really refreshing was the fact that although a YA book,the story doesn't take place in the school ground.Quite the opposite!This novel is more of a roadtrip and endless hunting than anything else.And i was amazed by Weatherly's ability to describe the scenery plus the fact that she didn't somehow forget to mention all the difficult or awkward parts such a trip between two strangers would imply (see the need of clean underwear or personal hygiene).Somehow, in books that describe similar situations,the protagonists either in some magical way fulfill those needs or such necessities are never mentioned.
The story,although not unique,it was definitely different.We have known angels as good creatures,but this book presents them as really terrible and nasty,a fact that i considered a plus.Lately,books with angels are written all the time and they usually are good and all,so writing a book about them as the bad ones makes a difference that,as far as i'm concerned works in favor for the story.
All in all,Angel is a really good book,i totally recommend.And one of those series i will definitely continue reading!After all,the ending of this one left too many things hanging and i really want to say how the story will progress.

Email ThisBlogThis!Share to TwitterShare to FacebookShare to Pinterest
Labels: L.A. Weatherly, Reviews, YA