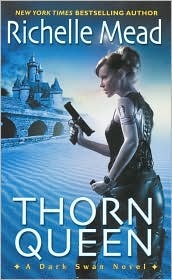 Eugenie Markham is a shaman for hire, paid to bind and banish creatures from the Otherworld. But after her last battle, she s also become queen of the Thorn Land. It s hardly an envious life, not with her kingdom in tatters, her love life in chaos, and Eugenie eager to avoid the prophecy about her firstborn destroying mankind. And now young girls are disappearing from the Otherworld, and no one--except Eugenie--seems willing to find out why.


Eugenie has spilled plenty of fey blood in her time, but this enemy is shrewd, subtle, and nursing a very personal grudge. And the men in her life aren t making things any easier. Her boyfriend Kiyo is preoccupied with his pregnant ex, and sexy fey king Dorian always poses a dangerous distraction. With or without their help, Eugenie must venture deep into the Otherworld and trust in an unpredictable power she can barely control. Reluctant queen or not, Eugenie has sworn to do her duty--even if it means facing the darkest--and deadliest--side of her nature...

OMG!Storm Born was really good and interesting!Thorn Queen... is that much better!I really don't know how Richelle Mead manages but her writing gets better and better the whole time!To be honest,i didn't expect the sequel of Storm Born to be better and some reviews i read where a bit disheartening but i was quite pleasantly surprised!I enjoyed every single page of this book and especially after a certain point i just couldn't put it down!
I liked all of the characters' evolution.We got to learn much more about Kiyo's character,who in the first book of the series was the impersonation of male sexual attraction.Well,in this book we get to know a bit more about his character and motives and to be honest,i wasn't that thrilled of his character!I didn't like how he treated Eugenie at bed and much like he treated her in the bedroom he also treated her outside of it.I somehow got the feeling that he was a bit intimadated by Eugenie's power plus he just wanted to have the upper hand in everything,he just did it in not that obvious a way.More or less i was a bit troubled with Kiyo in this book and by the end of it i was mad at him!
Eugenie on the other hand is yet again torn in this book.Torn between two men and two worlds each one of them are representing a different part of her soul.She loves Kiyo but she's attracted to Dorian as well.She feels human,but the same sense of responsibility that feels towards protecting humans grom gentry,she also feels towards her people,no matter how much she resents herself for that.In overall,Eugenie is among the most well built and consistent characters i have ever come across in books and i just really love her!
Dorian,is pretty mush the same wonderful Dorian of the first book,and although again his appearances aren't very long i just love him!Haven't i already told i'm team Dorian?He still has his own motives about everything he does but he somehow feels a little bit more trouthfull than Kiyo.I just hope he doesn't turn to be a completely selfless bastard,cause that will be a major let down!
The story is amazing!Quick paced and with some breathtaking descriptions!The parts where Mead describes Otherworld are really like coming out of another era!Her world building was obvious from the first book,but here many parts of the story unfold at Otherworld,thus giving us the chance to meet this world in more details!And i just loved the way Mead combined our modern world with the one where electricity doesn't even exist as a concept!It was wonderful!
One more thing i want to add is that i also liked the way Richelle Mead is treating her heroes...She's not afraid to make them live through terrible incidents and get out even stronger as characters.She did it with Rose in Vampire Academy and she did it yet again with Eugenie.I'm not gonna say more cause it will be a huge spoiler but once i reached that part of the book i was left speechless!
After finishing Thorn Queen,all i can think is that i really need to read the next book in the series,but i have to wait unfortunatelly!At least Vampire Academy will soon be in my hands,so,that counts for something!