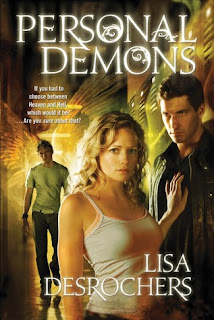 Frannie Cavanaugh is a good Catholic girl with a bit of a wicked streak. She has spent years keeping everyone at a distance—-even her closest friends—-and it seems as if her senior year is going to be more of the same . . . until Luc Cain enrolls in her class. No one knows where he came from, but Frannie can’t seem to stay away from him.


What she doesn’t know is that Luc is on a mission. He’s been sent from Hell itself to claim Frannie’s soul. It should be easy—-all he has to do is get her to sin, and Luc is as tempting as they come. Frannie doesn’t stand a chance. But he has to work fast, because if the infernals are after her, the celestials can’t be far behind. And sure enough, it’s not long before the angel Gabriel shows up, willing to do anything to keep Luc from getting what he came for. It isn’t long before they find themselves fighting for more than just Frannie’s soul.

Reviewing Personal Demons is one of those rare occasions where i find myself unwilling to make a review thus,making it hard for me to write it.In most cases,i either like a book,or i like it but have some issues or i just don't like one, but in every single case i know exactly what to write in my review.Personal Demons is one of those rare (at least for me) occasions where i know i don't like a book but can't pinpoint exactly why not...
Let me get it straight.It's not that i didn't exactly like this book,i just couldn't get into it.And although it was a good book i just couldn't care about the story or the characters.Reading it,i couldn't like it nor dislike it.I just read it in an emotionless state more or less.
The story was exactly my cup of tea!I love angel stories!The whole good versus evil battle among angels and demons or fallen angels just fascinates me and it's a rare occasion where a book with such a plotline leaves me untouched.The plot was also good and it varied from the most YA books i've read dealing with angels.It was more religious derived from what i've read but with no religious issues whatsoever.But still,that wasn't enough to grab my attention...I really can't say why.It's the first book that i didn't enjoy and can't pinpoint exactly what bothered me.The characters were ok,the plot consistent,the story interesting,at least for my tastes,but i just couldn't connect with any of the characters or get into the world Lisa Desrochers created.I just read this book out of mere curiosity.
There's only one thing i know for sure i didn't like but still that's not reason enough to make me dislike a book.The book was a first POV narration between the main two characters but bot Frannie and Luc "talked" in more or less the same way,making it difficult for me to descern which of those characters talked each time.If i should leave a chapter in the middle,i had to go back and check who was talking most of the times...But as i said,that's not reason enough to say a book wasn't good.
So,i'm gonna rate this book with 2 stars,or maybe 2.5 but only because i just couldn't get into the story and thus like it.People might disagree with my rating,but honestly,i can't rate higher a book i didn't like,even if it technically is good.After all,a book's rate is just my personal opinion of the book.

Email ThisBlogThis!Share to TwitterShare to FacebookShare to Pinterest
Labels: Lisa Desrochers, Reviews, YA