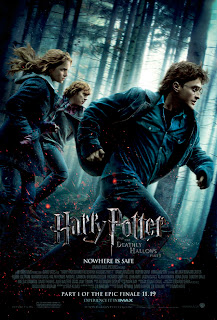 Yesterday was an amazing day for me!I mean i got to see Harry Potter and The Deathly Hallows sooner than i expected,why shouldn't i be excited!Yesterday was the avant premiere of the movie here in Greece and Giota from Just Another Book Blog was awfully kind and gave me her invitation to the event since she was unable to attend.And of course i wouldn't miss it for the world!
The first part of the final instalment in the Harry Potter series was way better than i expected!Was so amazing and good that after 146 minutes of movie and another 45 minutes of waiting until it began didn't tire me at all!The direction was the best i've ever seen in this series and i don't know if it's because they finally splitted a book into two movies or because David Yates is such a good director.Probably both!I believe that from the 4th book and on the movies should be splitted but i don't know,i'm not exactly an expert so i may be wrong...This movie was everything i expected it to be.Dramatic,funny, action driven and pretty close to the book.The special effects were awesome and believable given the fact we talk about a magical world,the locations they selected for filming just breathtaking and the battles better than i could even dare to imagine!All the actors were good,no complaint whatsoever and really and honestly there wasn't even one single thing i didn't like!
I can go on and on forever about how much i liked the movie and how i now feel the irresistible urge to re read the whole series for the 7th or 8th time,i don't know,i've lost track of how many times i've read those books!
Go get your tickets fast to watch Harry Potter... it just worths it!
Posted by Unknown at 15:53