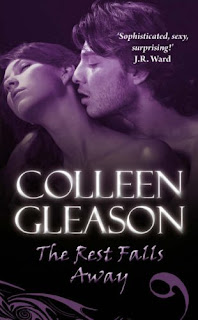 In every generation, a Gardella is called to accept the family legacy of vampire slaying, and this time, Victoria Gardella Grantworth is chosen, on the eve of her debut, to carry the stake. But as she moves between the crush of ballrooms and dangerous, moonlit streets, Victoria's heart is torn between London's most eligible bachelor, the Marquess of Rockley, and her enigmatic ally, Sebastian Vioget. And when she comes face to face with the most powerful vampire in history, Victoria must ultimately make the choice between duty and love.

The Rest Falls Away... was different from what i expected it to be.And in a good sense different!At the begining of this book i couldn't help but feel like reading a Jane Austen novel.Not that the writing style was same or the story in any way,but the picture of the 19th British society Gleason built had the same "feeling" with the one Austen used to describe in her books.All those balls,the husband pursuit the society events and structure were so vividly described that i just fell immediatelly in love with this book!
The characters here,were ok,most of them.I didn't get to know them really well cause there weren't any in depth character development,except perhaps Victoria's character,but still,the reader only had glimpses of how she felt and why she acted the way she did at certain points.I'd like for her character to be more developed,to get a glimpse of her feelings towards accepting the huge responsibility of her family legacy.Instead,i just felt that Victoria herself,just didn't fully undeerstand what she got herself into except maybe until towards the end.Only under that perceptive i could justify some of her irrational decisions.Anyway,it's a 5 book series,so perhaps,more character development is on the way!
The story behind this book is trully intriguing!I mean, a vampire slayer in the 19th century who hides her weapons in her hair in plain view?Amazing!Somehow i felt,that if any Jane Austen's book was to be altered and enriched with a paranormal addition,that was the way it should be done.But again here,i felt that the plot had some holes.I didn't get how the Venators sensed the vampires among them.I mean,at first,i thought they could always sense them,but then after a certain,minor surely,incident i had to rethink it.It was like an eclectic vampire perception.Anyway,i spotted some other inconsistencies but all of them were of little importance in the main plot,so i just skipped them.
The romance on the other hand,was,just lukewarm.It had potential,and i believe in the next instalments of this series it will get better,but in the first book,it just didn't catch my interest,neither of the two Victoria's romantic interest in this case.Somehow,the romance felt rushed with the one and not fully developed with the other.Although there is also a third potential romantic interest and i'm betting on it to be the best,at least in terms of sexual tension and development.At least i hope it is!
All in all,The Rest Falls Away is a thoroughly entairtening read (don't mind me whining all the time above,it's just me,i'm really whiny about everything!) and you don't get bored for a minute!I already ordered the second book and i can't wait to see how Victoria's story is continued!