READING: The Harrowing by Alexandra Sokoloff 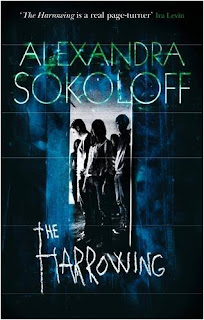 Baird College Mendenhall echoes with the footsteps of the last home-bound students heading off for Thanksgiving break, and Robin Stone swears she can feel the creepy, hundred-year-old residence hall breathe a sigh of relief for its long-awaited solitude. Or perhaps it's only gathering itself for the coming weekend.


As a massive storm dumps rain on the isolated campus, four other lonely students reveal themselves: Patrick, a handsome jock; Lisa, a manipulative tease; Cain, a brooding musician; and finally Martin, a scholarly eccentric. Each has forsaken a long weekend at home for their own secret reasons.


The five unlikely companions establish a tentative rapport, but they soon become aware of a sixth presence disturbing the ominous silence that pervades the building. Are they the victims of a simple college prank taken way too far, or is the unusual energy evidence of something genuine---and intent on using the five students for its own terrifying ends? It's only Thursday afternoon, and they have three long days and dark nights before the rest of the world returns to find out what's become of them. But for now it's just the darkness keeping company with five students nobody wants and no one will miss.

The Harrowing is the perfect Halloween read!I just loved it!It's been some time since i stayed awake at night just to finish a book but with Harrowing i just couldn't sleep unless i finished it!
It was an incredible book,like watching a good horror movie unfolding between your pages!The atmosphere was chilly and creepy and since i was reading it at night there were times i caught myself looking with the corner of my eye for anything moving.The story was short,something really good cause that way it didn't drag and page after page there was something new and scary happening.You have all the typical cliches of a horror movie (i really can't compare it with another horror book since i haven't read any other before) but believe me i didn't care for a minute and it didn't spoil the fun of the book either.The strange sounds and the creepy presence in this book are given so vividly that if you closed your eyes you could hear and feel them as well!
The story is set in a university dorm where 5 teenagers with nothing seemingly common between them stay there for the Thanksgiving weekend.They start a seance as a joke and from there all hell breaks loose.I liked that the horror in this book was equally mixed with a nice touch of mystery,with the story of a kid,who lived and died 80 years ago in the same place,unfolding along with the current story.I loved the way Sokoloff approached the matter of ghosts and demons.Firstly,at last the supernatural element is approached through a scientific approach and the kids tried really hard to explain everything logically before accepting the supernatural.All those Freudian quotes and the attempts to explain ghosts under a Freudian perception of facts just made me love it even more.My best friend and I are both psychologists and just die of good ghost stories and have made endless conversations about them where Freud certainly has his share of mentioning.The other thing i loved was the demonic approach through Kaballah.The only things about demons i know are those Christianity provides.Reading about how another religion perceives evil and demons just fascinated me!
I don't want to say much about the story and the characters in this book cause part of it's magic is to know about them while reading the book.So,i'll just say that i totally recommend this book to everyone who loves ghost stories!