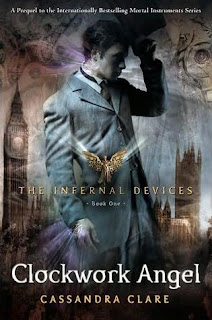 
When sixteen-year-old Tessa Gray crosses the ocean to find her brother, her destination is England, the time is the reign of Queen Victoria, and something terrifying is waiting for her in London's Downworld, where vampires, warlocks and other supernatural folk stalk the gaslit streets. Only the Shadowhunters, warriors dedicated to ridding the world of demons, keep order amidst the chaos.


Kidnapped by the mysterious Dark Sisters, members of a secret organization called The Pandemonium Club, Tessa soon learns that she herself is a Downworlder with a rare ability: the power to transform, at will, into another person. What's more, the Magister, the shadowy figure who runs the Club, will stop at nothing to claim Tessa's power for his own.


Friendless and hunted, Tessa takes refuge with the Shadowhunters of the London Institute, who swear to find her brother if she will use her power to help them. She soon finds herself fascinated by—and torn between—two best friends: Jem, whose fragile beauty hides a deadly secret, and blue-eyed Will, whose caustic wit and volatile moods keep everyone in his life at arm's length...everyone, that is, but Tessa.


As their search draws them deep into the heart of an arcane plot that threatens to destroy the Shadowhunters, Tessa realizes that she may need to choose between saving her brother and helping her new friends save the world...and that love may be the most dangerous magic of all.

OMG!!!Really i can not say much about Clockwork Angel!It is THAT good!I was a big fan of Mortal Instruments series also,so it would take for the first instalment of The Infernal Devices series to be a really bad book for me not to like it.And it was far from bad...
Clockwork Angel has everything all three books of The Mortal Instruments series had.It was action packed,with well developed characters and if i may say so,here,the characters were even better.At first i thought that Will was just another Jace,Jem,another Alec and Jessamine another Isabelle,but i was really mistaken...Will and Jace certainly share the same way to deliver witty answers and a wicked sense of humour but Will is a far more dark character than Jace was for me, with secrets of his own that thankfully and frustratingly aren't revealed yet and Jem and Jessamine prove really soon that they are quite different.I know,comparing characters from this new series to the previous one isn't really nice but having read Mortal Instruments i find it rather unavoidable.
The plot on the other hand was more than amazing.The writing style was exceptional, something all Cassandra Clare's fans are accustomed with.Twists and turns in the story made you anxious to know how things evolved and the romantic element was just perfect.Not too strong an element in this story,but apparent and wonderfully built.Some of the twists i must admit that i saw them coming,but not the full extent of the events,something that just added to the plot element.
Before anything else,i have to say that the setting of this book was by far,the best part for me.The Victorian era England presented here was plainly engrossing!I enjoyed the contrast between the Shadowhunter women and the rest "mundane" women who at that time were expected to do nothing else but marry and stay home.I liked that contrast and how could women of both races feel imprisoned in the role a certain society expects them to fulfill.
All in all,Clockwork Angel is an amazing first book in a series that promises to be as exciting as Mortal Instruments and maybe even more.Cassandra Clare's writing style is addictive and more mature and she manages to create heroes you tend not to forget.Too bad the next book in the series won't be released until next year.I can't wait to put my hands on it!