The Poison Diaries by Maryrose Wood 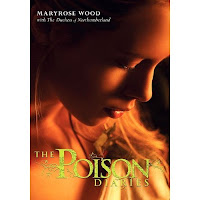 When a traveler brings an orphan to their cottage, he claims the boy has special gifts that Thomas might value. Jessamine is drawn to the strange but intriguing boy, called Weed. Soon their friendship deepens into love. Finally, Weed shares his secret: He can communicate with plants. For him they have distinct personalities—and some are even murderous. From the locked garden the poisonous plants call to Weed, luring him with promises of deadly power.

When Jessamine falls inexplicably ill, only Weed’s relationship with the Poisons can save her. But Thomas is determined to exploit Weed’s abilities, even if it risks Jessamine’s life—or drives Weed to the brink of madness.…
Over the Moon by Diane Daniels

With one touch of an object, Rae can pick up what whoever touched it before her was thinking. What she hears freezes her blood: Someone close by is planning to hurt her...and she has no clue why. As Rae reluctantly teams up with Anthony to figure out who is behind these malicious thoughts, she stumbles upon a much larger secret. And this mystery from her past may hold the key to Rae’s future
Face Off (Laura Blackstone,#2) by Mark Del Franco

Coming on July 27th by Ace
Laura Black is a druid who can change her appearance. She is both the Fey Guild's public relations director and a secret agent for the International Security Agency. And now she'll have to choose where her loyalties lie when a political war breaks out between the fey and human populations...
Waking the Witch (Women of the Otherworld, #11) by Kelley Armstrong
Coming on July 27th 2010 by Dutton Adult

The orphaned daughter of a sorcerer and a half-demon, Savannah is a terrifyingly powerful young witch who has never been able to resist the chance to throw her magical weight around. But at 21 she knows she needs to grow up and prove to her guardians, Paige and Lucas, that she can be a responsible member of their supernatural detective agency. So she jumps at the chance to fly solo, investigating the mysterious deaths of three young women in a nearby factory town as a favor to one of the agency's associates. At first glance, the murders look garden-variety human, but on closer inspection signs point to otherworldly stakes.

Soon Savannah is in over her head. She's run off the road and nearly killed, haunted by a mystery stalker, and freaked out when the brother of one of the dead women is murdered when he tries to investigate the crime. To complicate things, something weird is happening to her powers. Pitted against shamans, demons, a voodoo-inflected cult and garden-variety goons, Savannah has to fight to ensure her first case isn't her last. And she also has to ask for help, perhaps the hardest lesson she's ever had to learn.
Eternal Kiss of Darkness (Night Huntress World,#2) by Jeaniene Frost

Coming on July 27th 2010 by Avon
An immortal war has been brewing in the darkness…and now one woman has stumbled into the shadows.

Chicago private investigator Kira Grace...more An immortal war has been brewing in the darkness…and now one woman has stumbled into the shadows.

Chicago private investigator Kira Graceling should have just kept on walking. But her sense of duty refused to let her ignore the moans of pain coming from inside a warehouse just before dawn. Suddenly she finds herself in a world she’s only imagined in her worst nightmares.

At the center is Mencheres, a breathtaking Master Vampire who thought he’d seen it all. Then Kira appears—this fearless, beautiful…human who braved death to rescue him. Though he burns for her, keeping Kira in his world means risking her life, yet sending her away is unthinkable.

But with danger closing in, Mencheres must choose between the woman he craves, or embracing the darkest magic to defeat an enemy bent on his eternal destruction.

Coming on July 27th  2010 by Dell
Evangeline Stone, a rogue bounty hunter, never asked for a world divided between darkness and light…

…or the power to die and live agai...more Evangeline Stone, a rogue bounty hunter, never asked for a world divided between darkness and light…

…or the power to die and live again in someone else's borrowed body. After a murder plot meant to take her out leaves an entire race of shapeshifters nearly extinct, Evy is gnawed by guilt. So when one of the few survivors of the slaughter enlists her aid, she feels duty-bound to help—even though protecting a frail, pregnant shifter is the last thing Evy needs, especially with the world going to hell around her.

Amid weres, Halfies, gremlins, vamps—and increasingly outgunned humans—a war for supremacy is brewing. With shifters demanding justice, her superiors desperate to control her, and an assassin on her trail, Evy discovers a horrifying conspiracy. And she may be the only person in the world who can stop it—unless, of course, her own side gets her first.
Jealousy (Strange Angels,#3) by Lilith Saintcrow

Coming on  July 29th 2010 by Sleuth RazorBill
Dru Anderson might finally be safe. She’s at the largest Schola on the continent, and beginning to learn what it means to be svetocha–half vampire, half human, and all deadly. If she survives her training, she will be able to take her place in the Order, holding back the vampires and protecting the oblivious normal people.

But a web of lies and betrayals is still closing around her, just when she thinks she can relax a little. Her mentor Christophe is missing, her almost-boyfriend is acting weird, and the bodyguards she’s been assigned seem to know much more than they should. And then there’s the vampire attacks, the strange nightly visits, and the looks everyone keeps giving her. As if she should know something.

Or as if she’s in danger.

Someone high up in the Order is a traitor. They want Dru dead–but first, they want to know what she remembers of the night her mother died. Dru doesn’t want to remember, but it looks like she might have to–especially since once Christophe returns, he’ll be on trial for his life. The only person who can save him is Dru.

The problem is, once she remembers everything, she may not want to…
Promise (Soul Savers,#1) by Kristie Cook

Coming on July 30th by Ang'dora Productions, LLC
Alexis Ames has a life full of promise…but not all promises can be kept.

When Alexis Ames is attacked by creatures that can’t be real, she decides it’s time she learns who she really is, with or without the help of her mother, who guards their family’s secrets closely. After meeting the inhumanly attractive, multi-talented Tristan Knight, however, Alexis retreats behind her façade of normalcy…until she discovers he’s not exactly normal either. Then their secrets begin to unravel.

Their union brings hope and promise to her family’s secret society, the Angels’ army, and to the future of mankind. But it also incites a dangerous pursuit by the enemy – Satan’s minions and Tristan’s creators. After all, Alexis and Tristan are a match made in Heaven and in Hell.

"When seventeen-year-old Tiana moves to Hurricane, Utah, her comfortable world is turned upside down as she traverses the rough waters of adjusti...more
Posted by Unknown at 18:56