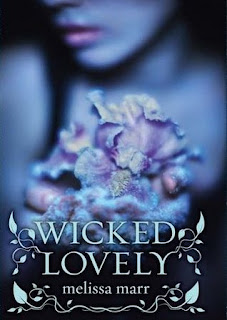 Rule #3: Don't stare at invisible faeries.
Aislinn has always seen faeries. Powerful and dangerous, they walk hidden in the mortal world. Aislinn fears their cruelty-especially if they learn of her Sight-and wishes she were as blind to their presence as other teens.


Rule #2: Don't speak to invisible faeries.
Now faeries are stalking her. One of them, Keenan, who is equal parts terrifying and alluring, is trying to talk to her, asking questions Aislinn is afraid to answer.


Rule #1: Don't ever attract their attention.
But it's too late. Keenan is the Summer King, who has sought his queen for nine centuries. Without her, summer itself will perish. His is determined that Aislinn will become the Summer Queen at any cost-regardless of her plans or desires.


Suddenly none of the rules that have kept Aislinn safe are working anymore, and everything is on the line: her freedom; her best friend, Seth; everything.
Faery intrigue, mortal love, and the clash of ancient rules and modern expectations swirl together in Melissa Marr's stunning twenty-first-century faery tale.

This book has a certain faery tale feel to it!The writing style was constantly reminding me of a faery tale,with the good and bad guys,the prince charming and a heroine who doesn't want to be saved!I have to admit it,although at times i was lost with the many point of views(it's not my cup of tea,what can i say!),Melissa's Marr writing style made me dream...
I'm not a big fan of books of faeries,not because i don't like faeries but because most of the books i read of them where not that good,so i was a bit reluctant to pick this book.But,suprisingly,it wasn't bad at all!It was really different from most YA books i've read with an ending that i couldn't see coming,cause it's not the typical happy ending,at least not my typical happy ending!
I loved Donia,more than Aislinn i'm afraid so,and Seth more than Keenan.Keenan's character was,well,underdeveloped for me.Although many chapters of the book was from his point of view i couldn't get an insight of his character.I couldn't understand his feelings,other than his need to save his people,which makes him a good king i suppose,but didn't give anything on his character building.
I also have to point out that the plot has huge holes...The whole thing with the curse was never fully explained nor the conditions under which this spell would break.Why,were all the previous girl failed should Aishlinn succeed?I'd like some more explanation but i can't continue saying anything more without spoilers.
Anyway,to sum it up it was a decent modern faery tale,maybe not extraordinary but surely an entairtening read and certainly i will continue with the rest books in the series!