READING: The Scent of Shadows(Signs of the Zodiac,#1) by Vicki Pettersson

When she was sixteen, Joanna Archer was brutally assaulted and left to die in the Nevada desert. By rights, she should be dead. Now a photographer by...more 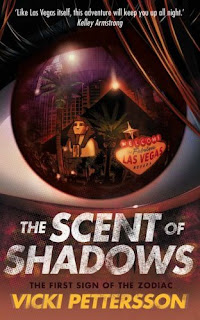 When she was sixteen, Joanna Archer was brutally assaulted and left to die in the Nevada desert. By rights, she should be dead. Now a photographer by day, she prowls a different Las Vegas after sunset: a grim, secret Sin City where Light battles Shadow, seeking answers to who or what she really is . . . and revenge for the horrors she was forced to endure. But the nightmare is just beginning, for the demons are hunting Joanna, and the powerful shadows want her for their own . . .

I was so excited when this book arrived at my mailbox,and so thrilled to start reading it,that when i actually read it,all this excitement transformed into the most utter disappointment...
I couldn't care less about this book.The main heroine,Joanna Archer,is indeed an intrigue character.I liked her humour,her lines,the way she,most of the times,reacted to situations.And that is as far as my likeness towards this book goes.The plot has so many holes,that,i,at least,found it hard to follow.I mean come on,there's a dead body lying on a street and noone has seen it or called the police,until the situation is handled by the good guys some 12 hours later?This is,mildly phrasing it,strange...
Also,the idea of the superheroes of the Zodiac didn't thrill me and that was when i lost it completely.Up until then i was patient and kept believing that the book,would finally pick up,but after that i was sure,it was nothing that could catch my interest.And the constant use of the world superhero and the references to comics just worsened everything.However,the worst thing in my opinion was her relationship with Ben.And not because it was poorly written but because he was supposed to be her soul-mate,the man who loved her since forever.How could a man that truly loves you,turn his back when you need him the most.I don't know if it's only me,but after beeing raped,your supposedly soul-mate doesn't break up with you.At least not in my world.And most importantly,he could do whatever he wanted,but why would the main heroine run to him like nothing happened after some years.I get it,he loved her,he was a teenager,he had his issues,ok,but why should Jo,just erase everything,and not just erase,but actually act like nothing has happened,like they had broken up for some entirely different reasons and they just picked up their relationship some years later from where they had left it.
I must admit it's hard for me to write a bad review.No matter what,a writter leaves a part of his soul with each book he/she writes and i always feel bad to criticize anyone.Bad when stating my opinion i have to tell the truth no matter what.