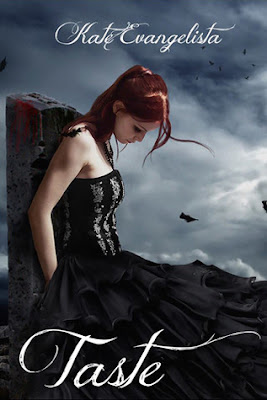 At Barinkoff Academy, there's only one rule: no students on campus after curfew. Phoenix McKay soon finds out why when she is left behind at sunset. A group calling themselves night students threaten to taste her flesh until she is saved by a mysterious, alluring boy. With his pale skin, dark eyes, and mesmerizing voice, Demitri is both irresistible and impenetrable. He warns her to stay away from his dangerous world of flesh eaters. Unfortunately, the gorgeous and playful Luka has other plans.

When Phoenix is caught between her physical and her emotional attraction, she becomes the keeper of a deadly secret that will rock the foundations of an ancient civilization living beneath Barinkoff Academy. Phoenix doesn’t realize until it is too late that the closer she gets to both Demitri and Luka the more she is plunging them all into a centuries old feud.

I have to admit it, when I first read the premise of Taste, I thought that I should expect something like Vampire Academy. I don't know why but something about the fact that the story is set in a strange school, something about the name Demitri, and I just assumed that Taste would be a more or less typical YA story. Boy I was so wrong and I couldn't be happier about it!

Taste is so unique, so new a story that all my previous thoughts of any resemblance between Kate Evangelista's story and Vampire Academy or anything else for that matter scattered away really soon! I won't say why, believe me not knowing what mythical creature this story is about or anything else for that matter, made it all the better for me! Taste is a surprise of a YA novel!

Kate Evangelista's voice is strong and fresh and she has a remarkable ability to create so intricate worlds that it would be safe to say that we should expect great things from her. I strongly believe that she has much more to give and that in the future we will see stories of her become quite the sensation. I mean her world building is unlike anything I have read so far, fully detailed but not boring even for a single minute, and most of all understandable. Evangelista's writing is efficient and straight to the point. Not even for a single minute was I bored and as soon as I started reading this story, the surprises kept coming one after the other.

And for starters, the fact that from the premise I again assumed that the story would take place in school grounds. But again Evangelista surprised me with the way she presented her story and well, as I said in the beginning of this review there's nothing typical about Taste and nothing is exactly as it seems to be. From the narration to the world building everything screams awesomeness!

And the surprises don't end here. The ever present in so many YA titles nowadays love triangle doesn't make it's appearance! You heard me right. There might be two hot guys in this story, there might be some light flirting, just enough to spice things up, but at last, this is a story that doesn't deem necessary for its heroine to "struggle" to decide between two perfect guys when more important things in the story happen. As I said, Taste is fresh :)

And last but not least, I'd like to mention the heroine, Phoenix, a special character that will stick to my mind for a number of reasons. Evangelista did a splendid job describing her, the way she always felt lonely even in the middle of a large group of people, a girl who's deprived of love and attention, who may occasionally act in an impulsive way to get, her father's mostly, attention but who has a pure heart, who's brave and caring and everything good at heart.

All in all, Taste is a YA novel that took me by surprise with its freshness and its amazing and intriguing world building. Totally recommend it.

*This title was provided for review courtesy of the author


And don't forget to check back tomorrow to meet Kate Evangelista and learn more about Taste as well as have a chance to win a copy of this amazing book :)
Posted by Unknown at 16:00