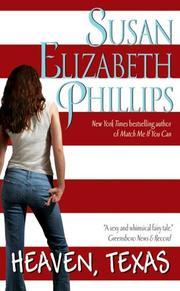 Come heck or high water, Gracie Snow is determined to drag the legendary ex-jock Bobby Tom Denton back home to Heaven, Texas, to begin shooting his first motion picture. Despite his dazzling good looks and killer charm, Bobby Tom has reservations about being a movie star -- and no plans to cooperate with a prim and bossy Ohio wallflower whom he can't get off his mind or out of his life. Instead, the hell-raising playboy decides to make her over from plain Jane to Texas wildcat.


But nothing's more dangerous than a wildcat with an angel's heart in a town too small for a bad boy to hide. And all hell breaks loose when two unforgettable people discover love, laughter, passion -- and a match that can only be made in Heaven.

Review originally posted at Book Lovers Inc
The second book in the Chicago Stars series,is as good as the first one and then some more!I enjoyed reading it beyond words!
Heaven,Texas is the story of Bobby Tom Denton,the Texan super star quarteback of the Chicago Stars,after he retired because of a severe injury and Gracie Snow, a 30 year old virgin, producer assistant who is desperately trying to change her life.
Susan Elizabeth Philips is a brilliant writer, balancing the romantic,humorous and dramatic element of her stories perfectly!She manages to stir such emotions to her readers,and that is an ability to admire,at least in my opinion.
Bobby Tom and Gracie are an amazing couple!They are so different from each other,so worlds apart in everything,that seeing those two fall in love slowly is sweetly excruciating!After a point,putting this book down was plainly impossible.I just wanted to see what happened next!So simple!
Once more,I had a bit of a rough start with this book,the same as with It Had to be You.I can't pinpoint exaclty why,but like before that quickly changed and Heaven, Texas sucked me in its story!
Gracie is the known case of the ugly duckling turning into swan,but that was done in such a way,that it didn't struck as a miracle or unbelievable like in other stories I have encountered.
Bobby Tom,despite being arrogant and a bit chauvinist,to put it mildly, managed to make me like him.Don't ask me how that was even possible,but I could honestly forgive him pretty much everything!
All in all,Heaven,Texas is an amazing contemporary romance,that every romance reader out there should read!It's one of those books you simply can't resist!