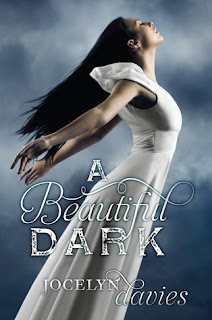 On the night of Skye's seventeenth birthday, she meets two enigmatic strangers. Complete opposites--like fire and ice--Asher is dark and wild, while Devin is fair and aloof. Their sudden appearance sends Skye's life into a tailspin. She has no idea what they want, or why they seem to follow her every move--only that their presence coincides with a flurry of strange events. Soon she begins to doubt not just the identity of the two boys, but also the truth about her own past.


In the dead of a bitingly cold Colorado winter, Skye finds herself coming to terms with the impossible secret that threatens to shatter her world. Torn between Asher, who she can't help falling for, and Devin, who she can't stay away from, the consequences of Skye's choice will reach further than the three of them could ever imagine.

A Beautiful Dark was a nice story and a sweet book,but to be completely honest with myself,it could have been so,so much more!Cause all the potential was there,ready to bloom,but for some reason things just got hold back...
One thing I immensely enjoyed in A Beautiful Dark was the writing style!All those images and the scenery and oh well,everything about it made me dream of places and that reason alone made me appreciate this book.The story was unique in its thought,but to be honest,I have so many questions about the world Jocelyn Davies created that I don't know where to start...Maybe the answers are to come in the next installments of the series but for me,the lack of them was a bit of a drawback.I couldn't grasp the whole idea behind the plot or how things exactly worked.
Another thing that bugged me was the love triangle...Don't get me wrong,usually I don't mind any love triangles,I'm so used of them,that the lack of one strike me as odd,not the other way round.What bugged me was the fact that the love triangle was the main focus of the story and everything else surrounded that.It was like the whole story was who would Skye pick or why despite the fact that the world the writer created could have easily be on the center stage...
Skye is among those characters I just can't make up myself about her and that's most because of the love triangle too.As soon as I grew fond of her,she would do something that didn't make me dislike her exactly but I found it childish of her to say the least and not in order with her overall portrayal as a mature and down to earth girl.I mean,she would come close with Asher let's say in one scene,then in the other she would be displeased with him and immediately run off to Devin.And I still believe,that if the love triangle wasn't so much centered in the story, things like that would be avoided and the story would flow more easily rather than go in circles at times around Skye's feelings towards either Asher or Devin.
Anyway,despite that,A Beautiful Dark was a nice story and the ending leaves so much open that one can't help but feel the need to continue with the series!

*This title was reviewed via NetGalley
Posted by Unknown at 20:14