REVIEW: An Affair with Mister Kennedy by Jillian Stone


An Affair with Mister Kennedy by Jillian Stone 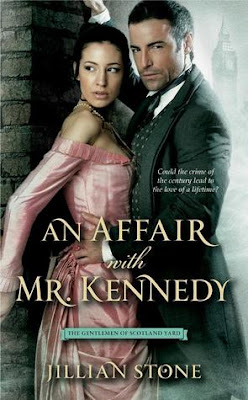 London, 1887. Part stoic gentleman, part fearless Scotland Yard man, Zeno "Zak" Kennedy is an enigma of the first order. For years, the memory of a deadly bombing at King's Cross has haunted the brilliant Scotland Yard detective. His investigation has zeroed in on a ring of aristocratic rebels whose bloody campaign for Irish revolution is terrorizing the city. When he discovers one of the treacherous lords is acquainted with his free-spirited new tenant, Cassandra St. Cloud, his inquiry pulled him unexpectedly close to the hear of the conspiracy -- and into the arms of a most intriguing lady.

Jillian Stone's debut novel simply rocks. Her voice is fresh and strong and believe me, we will see great things from her.
Her story was a mix of an Agatha Christie mystery wrapped up in a historical setting. Don't get me wrong, this is a historical romance, but the mystery is so well delivered and the action scenes so well planned, that it's not just your typical historical romance book.

If I could describe An Affair with Mister Kennedy with just one word, that would be liberating! Cassie, the main heroine, is far from what I was used to expect from an HR heroine. She's truly a female who doesn't succumb to a male's wish or follows the society's protocol. She's independent in an era when women rarely were. She rides a bicycle, wears pantaloons and smokes cigars! Granted, her widowed state allows her much more freedom than I have come to expect from such novels but nevertheless she's a free spirit at heart. Zeno on the other hand, is the man of my dreams! Not overprotective but does whatever is within his powers to protect those he cares about. He's smart, he's caring and he's a detective! What more could I ask?

As I said in the beginning, the best thing about An Affair with Mister Kennedy is Jillian Stone's exceptional and brilliant writing style. Her story is well researched and her references to automobiles, condoms and suffragettes made me want to research myself if all those things actually appeared at the time described in the book. Well, they did!
The other thing I loved so much about it is how different it is from all the HR novels I have read so far. There's action, there's chase in it, and mostly, the story unfolds out, in the streets and not in a ballroom.

All in all, An Affair with Mister Kennedy is an excellent debut novel from an author who I will "stalk" from now on. Her work just made a huge impression on me and it just stands out!