Past Undone by Viviane Brentanos 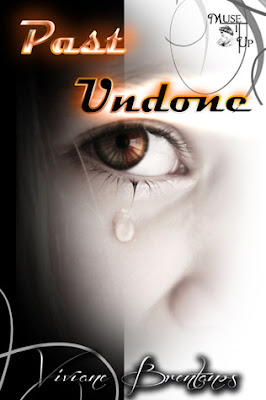 At nearly twenty-one, Sofie Jameson is a little tired of paying the price for her director father’s caped crusader routine. She wouldn’t mind so much but the bodyguards he periodically hires to protect her possess as much charm and wit as gulag guard.
Nik Lloyd is no exception. Mr. Lloyd has one simple set of rules: do as I say and don’t speak unless spoken to. Sofie wants to hate him on sight but it’s a little difficult when every time she looks at him, her feet leave the ground and she spins on an emotional roller coaster. Hidden away together in his beautiful Greek island home, Sofie soon realizes Mr. Lloyd is an ‘international man of mystery,’ and a man, if his housekeeper is to be believed, who is hiding dark secrets. The housekeeper claims he is a tortured soul. The livid scar on his back convinces Sofie she may be right. Who does he cry for at night? And just who is the mysterious young girl, Bella, who turns up out of nowhere, latching on to Sofie with all the tenacity of a limpet?


From the moment the author of Past Undone, Viviane Brentanos contacted me and asked me to review her newest release, I had a really good feeling. A good feeling that I'm glad to say that turned out to be true. Because Past Undone, was a unique story given in a really fresh way that I have to admit, took me by surprise!

The story is a well known one, spoiled or seemingly spoiled rich girl is in danger, her father hires a bodyguard who she wants to immediately hate but despite the best intentions both parties have to hate each other forever, they fall in love. As I said, the story is a well known one and used many times both in literature and in movies' script. But Past Undone has something unique woven in the main story, an element that not quite took me by surprise, but until it was revealed I kind of hoped and dreaded that it wasn't what I thought (though it was quite obvious), both at the same time. I won't reveal that element. I gather you'll understand it soon enough in the story for yourselves. It's that kind of spin in a story that you'll either love or hate. There's no middle option. And to be completely honest, I wasn't so sure I liked it when everything was revealed. But it turns out I did. Because that spin is what makes this book so memorable and distinguishes it from a whole other similar books out there.

I won't continue talking about that said spin. I'm afraid that in trying to prevent any spoilers I'm making myself incomprehensible.

As far as characters are concerned, I liked Nik more. Sofie was good I guess, I just couldn't connect to her fully or agree with her decisions and the way she acted. I understood the author's attempt to make her seem as a spoiled rich kid on the surface but in essence to create a down to earth and kind-hearted character, but I'm afraid that it wasn't a fully successful attempt all the time. There were times I felt that her bad temper was an act and others where she was just a bad mannered girl who couldn't take no for an answer, with no excuses.

But Nik, is a whole different story. Brentanos managed to capture with her descriptions the traumatised soul of a man with a dark past. The mystery that surrounds him is well handled and adds to the story.

Another reason that I enjoyed Past Undone was the fact that it was set in a Greek island. Well, I haven't read many contemporary books set in Greece and I just loved the setting of the story. And not because that setting is familiar to me but because Brentanos' descriptions were accurate and you could understand her love through the way she presented everything. The descriptions of food, of places, of beaches even the Greek words used were accurate and detailed, creating some beautiful images in my mind.

But, I have to point here that all those Greek words thrown casually here and there throughout the whole story, although they made me personally smile every single time I encountered them, I'm afraid that they will throw off the majority of the readers. I mean it may be funny for me to read the word "kolokithokeftedes" but for someone who has no idea what that means or what it could possibly be, I'm guessing it's not that funny... But maybe I'm wrong, I can't be certain about that one :)

The only slightly problematic area of the story for me was the relationship between Sofie and Nik. It seemed forced in many cases. I felt that Sofie's instant dislike of Nik was forced, just to create that love-hate relationship between them, as well as forced was the way Tula, the housekeeper, opens up to Sofie immediately just to give us and the heroine Nik's background. As a result, when the feelings between the main heroes changed, it didn't feel natural or that much sexy.

All in all, Viviane Brentanos has a strong voice and isn't afraid to mix in a perfectly ordinary story some unexpected elements that change her whole narration. Past Undone is a book that although not the best I have ever read, is unique in its own way and one I will remember. Fans of romantic suspense will really enjoy this one.

* The book was provided for review courtesy of the author.
Posted by Unknown at 15:59