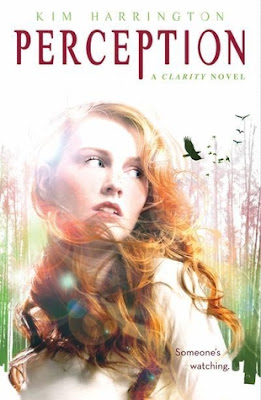 When you can see things others can't, what do you do when someone's watching you?

Everybody knows about Clarity "Clare" Fern. She's the psychic girl in school, the one who can place her hands on something and see hidden visions from the past.

Only Clare would rather not be a celebrity. She prefers hanging back, observing. Her gift is not a game to her.

But then someone starts playing with her head . . . and heart. Messages and gifts from a secret admirer crop up everywhere Clare turns. Could they be from Gabriel, the gorgeous boy who gets Clare's pulse racing? Or from Justin, Clare's hopeful ex-boyfriend who'd do anything to win her back?

One thing is certain. Clare needs to solve this mystery, and soon. Because the messages are becoming sinister, and a girl in town has suddenly disappeared.

I know that I will be in the minority of reviewers again, but I just have to say it: Perception disappointed me..

It was nothing like the first book, Clarity, which I absolutely adored and even though Harrington's writing style still saves the day, I have to say that it was nothing like what I expected of one the most exciting sequels of this year for me.

Perception is much like Clarity in many aspects but so different in others and I'm afraid that in the end of day, those were the aspects that defined my opinion of this book

Let's start with the things I liked about Perception.

The way Harrington writes is plainly brilliant. At least for me. Her writing style is fresh and to the point and her stories have an even pace and are so quickly read that you won't even notice when you reach the last page. On the plus side as well, is the combination of mystery and romance and creepiness that always fascinates me.

All those attributes were evident in the first book as well Clarity, so you can easily guess why I liked that one so much.

Now, one might wonder why, despite all those things I stated above that I liked about Perception, I still am a bit reluctant towards the book.

You see, for one thing, I had high expectations for this sequel. So if that was just a first book, I may have been more lenient towards it. But having already read how magically Harrington can deliver a story, Perception is just... too little.

The mystery for one thing was underdeveloped. The solution was right in front of the reader's eyes the whole time and in an obvious way. One could guess the murderer from miles away and from a very early point in the whole story. So, yes, I would have liked the mystery to be a little bit more complex. I liked the murderer and his motive and personality were consistent with the whole situation, but the whole thing sure could have been both a little more developed and delivered in a better way. After all, Harrington clearly showed us what she's capable of, so maybe that's why I expected more in that department.

And while the mystery department was underdeveloped, the romantic one was in full bloom! And that is the other reason I didn't like Perception nearly as much as Clarity.

You see, we already have the infamous love triangle working in full gear, and as if that wasn't enough, in the mix we are thrown a psychotic stalker, that would be the third love interest kind of, a sweet guy who although his role is of minor importance in the story we get some hints that he's also in love with Clare, that would be the fourth love interest, and a surprise character who could or could not have feelings towards Clare as well, and that would be romantic interest number five!

So you see, we have 5 possible suitors for Clare in Perception!!! Granted the last two I mentioned, there were only hints, and maybe I'm a sick mind for even considering them for possible love interests, but come on, it's not my fault, the hints were all there!

But even if the love interests in Perception are only two, Gabriel and Justin, believe me when I say it that they are more than enough for such a small story. And they are more than enough cause the whole story was focused on Clare's drama on who among those two super hot and super cute guys she would choose. There was a murderer on the loose, again, there was a stalker right after her, but Clare, was only focused on her making up her mind on those two. The world might go down in tatters but who would Clare choose was the primary focus in this book. So, yeah, I'll just go ahead and say it, the main reason I was disappointed in Perception was exactly that: the extra dose of romance and angst when the focus of the story should be somewhere else. At least for me.

All in all, Perception may be as good as Clarity in some departments, but to be honest with myself, I just expected more of Kim Harrington. After all, she can do way better than that. Way, way better.