The Golden Lily by Richelle Mead 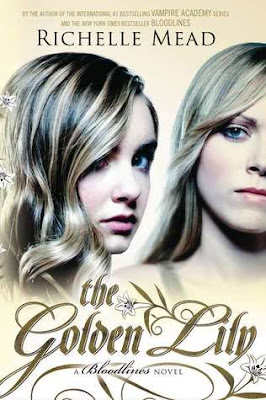 Sydney Sage is an Alchemist, one of a group of humans who dabble in magic and serve to bridge the worlds of humans and vampires. They protect vampire secrets—and human lives.

Sydney would love to go to college, but instead, she's been sent into hiding at a posh boarding school in Palm Springs, California–tasked with protecting Moroi princess Jill Dragomir from assassins who want to throw the Moroi court into civil war. Formerly in disgrace, Sydney is now praised for her loyalty and obedience, and held up as the model of an exemplary Alchemist.

But the closer she grows to Jill, Eddie, and especially Adrian, the more she finds herself questioning her age–old Alchemist beliefs, her idea of family, and the sense of what it means to truly belong. Her world becomes even more complicated when magical experiments show Sydney may hold the key to prevent becoming Strigoi—the fiercest vampires, the ones who don't die. But it's her fear of being just that—special, magical, powerful—that scares her more than anything. Equally daunting is her new romance with Brayden, a cute, brainy guy who seems to be her match in every way. Yet, as perfect as he seems, Sydney finds herself being drawn to someone else—someone forbidden to her.

When a shocking secret threatens to tear the vampire world apart, Sydney's loyalties are suddenly tested more than ever before. She wonders how she's supposed to strike a balance between the principles and dogmas she's been taught, and what her instincts are now telling her.

Should she trust the Alchemists—or her heart?

First of all, I just have to say that I have a soft spot for my favorite authors. For me to write a negative review of a book written by any of my favorite authors it would have to be really bad. But at the same time, I tend to judge an author whose work I'm familiar with and I really enjoy a bit harsher. And here is why my feelings are so mixed about The Golden Lily. Because if this was a book by another author, I wouldn't be expecting so much, so I would now be talking about a decent book, but nothing extraordinary that I would probably forget really soon. But we are talking about Richelle Mead here, so excuse me for putting it so blandly, but I expected something more than a decent book. Not that I didn't enjoy The Golden Lily but to be completely honest with myself, it was nothing like what I was used judging by the author's talent. Because Mead is talented. Hands down. For me to enjoy a book that I would completely disregard under any other circumstances, that speaks volumes.

But let's take things from the start. My main problem with The Golden Lily was that nothing amazing happens. This book is completely focused on Sydney, her awesomeness, school and dating drama and all the rest are of little consequence. Surely there is some progress in the main plotline, but everything is wrapped up quickly and without the spark that was evident in other VA books. There were only a handful of fighting scenes and those completely lacked that certain spark. And it's understandable to me to an extent. Sydney is no Rose. Rose was badass. Simple as that. Sydney can't fight, so even if everyone in this book talked over and over again about Sydney's awesomeness and badassness I just couldn't see it.... And it kind of created some expectations that couldn't be fulfilled. To clear myself, I'm not expecting for Sydney to be a new Rose. I don't want Sydney to be badass. Rose is only one and things should better stay that way. But, when throughout the whole book all I read is how great and special and amazing Sydney is, I kind of expect to see that. So, imagine my disappointment when all I got in fact was a Sydney who kept closing her eyes to the obvious, a Sydney who kept bitching about magic (although when needed she didn't pause to think a lot about using it) and a Sydney who preferred to close her eyes and not face reality in every aspect, whether that was her blind trust to the Alchemists or the subtle art of flirting. And for someone who claims that she has to "tune down" her smartness when talking with people, that behavior is anything but smart.

Other than that, Dimitri was more of a decorative character here, almost observing the story, not doing much (I kind of missed his hot self...), Jill was ok and Eddie was by far the most fun character. He always was for me. As far as Adrian is concerned, nothing good or bad to say about him. I liked how he took more space in this novel although we don't learn anything new about him, but the way he approached Sydney was cute and sooo obvious that I enjoyed him all the more.

All in all, The Golden Lily wasn't really good, not by Richelle Mead standards. Nothing much happens, Sydney is as a lukewarm character as always and the best part of this book was by far the last scene. Loved it! That scene, had the spark that I was searching in the whole novel. But just one scene, can't save the whole novel I'm afraid.