The Mage in Black by Jaye Wells 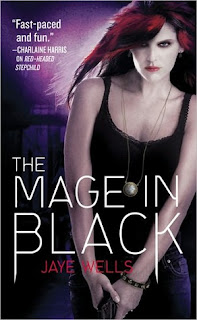 Sabina Kane doesn't have the best track record when it comes to family. After all, her own grandmother, the leader of the vampire race, just tried to kill her. When she arrives in New York to meet the mage side of her family, the reunion takes the fun out of dysfunctional.

On top of that, the Hekate Council wants to use her as a pawn in the brewing war against the vampires. Her mission will take her into the bowels of New York's Black Light district, entangles her in mage politics, and challenges her beliefs about the race she was raised to distrust. And Sabina thought vampires were bloodthirsty.

Review first published at Book Lovers Inc
The Mage in Black, begins immediately after the events that took place in the end of Red-Headed Stepchild and Sabina finds herself travelling with Adam to New York to meet her twin sister. In New York, along with embracing her mage side, Sabina finds herself copying with all sorts of new problems, from adjusting to a whole set of new rules, to figure out where she stands in the upcoming war of the dark races.
I really enjoyed The Mage in Black, I literally couldn't put it down, and although in some departments it was better than Red Headed Stepchild, I'm afraid I didn't like it as much as the first book and for that, I have to blame on one hand the fact that Adam was for the better part of this novel away and on the other the fact that the action scenes were less. But that, doesn't mean I didn't like this book. I seriously loved it and I can't wait to pick the next book in the series!
Once more, among my favorite parts of the book, where those featuring Gigughl! What can I say? He's probably the funniest demon I have ever read! Scratch that. He's probably the funniest character I have even read! And the fact that in this book his role is more extended made me love him even more. Him and Jaye Wells for creating him in the first place! And it's not weird that in all of the most memorable scenes of this book he's participating!
I liked the further world building and the character development. I even liked the politics of the dark races even though I'm not usually a big fan of politics in my books. but I terribly missed Adam... But since he's bound to have a more active role in the next book, I can forgive him everything!
All in all, even though I didn't enjoy The Mage in Black as much as the first book in the series, I can certainly say that this series is one of the most entertaining UF series I have picked in a long time.