Waiting on Wednesday: About that Night 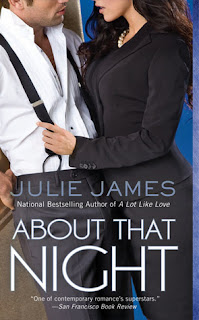 Though Rylann Pierce tried to fight the sparks she felt for billionaire heir Kyle Rhodes the night they met, their sizzling chemistry was undeniable. But after being stood up on their first date, Rylann never expected to see him again. So when she finds herself face to face with Kyle in a courthouse nine years later, she’s stunned. More troubling to the beautiful Assistant U.S. Attorney is that she’s still wildly attracted to him.

BUT SHE’S MAKING THE RULES

Just released from prison, Kyle Rhodes isn’t thrilled to be the star witness in a high-profile criminal case — but when Rylann comes knocking at his door, he finds she may be the one lawyer he can’t say no to. Still as gorgeous and sharp-tongued as ever, she lays down the law: she doesn’t mix business with pleasure. But Kyle won’t give up on something he wants — and what he wants is the one woman he’s never forgotten..

What I think:
Well, after reading everything that Julie James has published to this day, I have to admit that she's in my auto-buy list of authors! I plainly love everything she writes and especially her FBI series is one of my favorite contemporary romance series. If you are a fun of romantic literature just give her books a try. You won't bit disappointed!

Email ThisBlogThis!Share to TwitterShare to FacebookShare to Pinterest
Labels: Waiting on Wednesday