REVIEW: Circle of Desire (The Circle,#1) by Carla Swafford

Circle of Desire by Carla Swafford 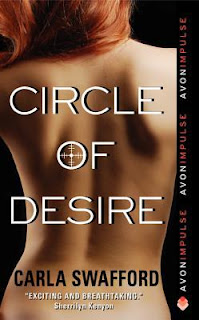 She Knew How To Fight But Not To Love ...

As the top assassin at The Circle, a shadowy group of mercenaries, Olivia St. Vincent can hunt down anyone. She's been trained since she was a teenager to kill without feeling, to interact with men without love. But when she's kidnapped by the enigmatic leader of a rival organization, she learns she's been lied to for years. She never worked for the good guys.

Collin Ryker believes the sultry woman he's abducted knows more than she's telling about The Circle and its plans for complete domination. Over time, as they work together, Olivia's tenacity and vulnerability captivate him. But if he isn't careful, Collin will fall into the biggest trap of all: caring for a woman who can betray him to his greatest enemy.

Have you read the premise of Circle of Desire??? As soon as I read it, images of one of my all time favorite shows, Alias, started coming to my head! I knew I just had to read this one, so before anything else, I have to thank the author for providing me with a copy of her book.

As I said, reading the premise, I thought I had something amazing in my hands, a non stop Romantic Suspense title, with enough twists in the plot to blow my head. And although is some departments it delivered exactly what the premise promised, in others I found it, not exactly lacking, but underdeveloped a bit.
Let me explain. Circle of Desire has all the potential to be a mind-blowing book, a book, considering you are a fan of the genre, you won't soon forget. The writing style is fairly good, the sex scenes well delivered and the plot was unpredictable and with enough twists to keep you turning the pages. But unfortunately that wasn't enough for me. And it really saddens me to say so, because firstly I was certain that this book would be amazing and secondly, because as I said, the potential for it to be amazing was there.

I'll start with the plot of this book. As I said, it was unpredictable, with many twists while at the same time hot and engaging. But the fact that it was mostly focused on the sexual play between Olivia and Collin and less on more crucial parts of the story was a turn off for me. There were chapters after chapters, focusing solely on Olivia's sexual frustration over Collin and how much she wanted to have sex with him, while he was trying really hard not to succumb to her charms. I really get the necessity of those chapters, I just wished that along with them there were also some chapters focusing on the why's and how's of Olivia's capture. I mean there were times in this book, were whole weeks or even a month would pass by in the blink of a chapter and the only crucial thing we got to learn was how much Olivia lusted over Collin and vice versa. I just needed along with that some more details about how Olivia adjusted to working with a rival organisation, how she finally decided to be more cooperative apart from her being blackmailed. Since she was portrayed as a really strong woman, I kind of find it hard to believe that she just happened to fully cooperate.

We have some rather huge gaps in the timeline of the story. At one point, 5 months are skipped from one chapter to another, 5 months I may add that would have shown exactly how Olivia adjusts to her new status and life while at another point we are informed that Olivia will be used to frame The Circle, while on the exact next chapter we are already a week ahead and right when the whole plan is set into motion without any details whatsoever apart from the absolutely necessary. As you can guess, in many cases, I struggled to understand the motives of the characters and adjust to the omission of details.

Apart from the time gaps in the story, there are also a number of questions that by the end of the book, I hadn't gotten my answers to. For instance, what exactly, apart from a secret organisation, is The Circle? Why all that fuss around that sword? I know some answers were given but they didn't satisfy my curiosity, not by a long shot.

That being said, although I may had some issues with Circle of Desire, I have to admit that for the better part of it I really enjoyed it. I liked how Olivia was portrayed and how the action scenes were delivered. It's just the fact that this book could easily have been so much better that frustrates me.

All in all, Circle of Desire, was a fun book, one that I enjoyed for the better part of it, but I really think that if a couple of things were better delivered it could easily have been one of the best romantic suspense titles I have ever read. After all, I really love the idea behind the universe Carla Swafford has created.

*This title was provided for review courtesy of the author