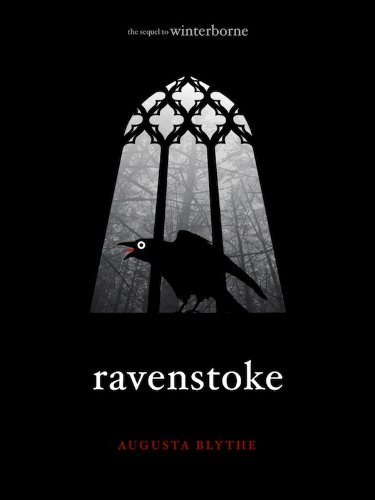 In WINTERBORNE, Loie and Mia's seventeenth birthdays brought more drama and surprises than they ever expected. Now, in Ravenstoke, they are adjusting to the aftermath and struggling to keep those newfound powers in check. When Andreas is called away to England under mysterious circumstances, a new guy is sent to Salcey Ridge in his place. Cian is smarmy and cocksure and Loie wants nothing more than to unleash a hellhound on him. Unfortunately, Cian isn't the only complication in their lives as the girls must also contend with the reappearance of Mr. Winterborne himself and Loie's most dreaded fear of all - a part in the school musical. Can the girls survive the rest of junior year unscathed?

Augusta Blythe isn't disappointing and manages to deliver once more an amazing book in her Universe Unbound series! Ravenstoke, is as good as her first book Winterborne and I really enjoyed reading about how Loie handles all the heart-breaking truths that were revealed about her and her family in the end of Winterborne.
Loie is really maturing in Ravenstoke and I just enjoyed every minute of her development as a character. She struggles not only to control all her new abilities but to come to terms with her father's decisions. Add to that the fact that she has to overcome her feelings about Andreas and one could say that she has more than enough on her plate! I found really refreshing the fact that Blythe created a heroine who despite how difficult things might get in her life, she just puts her head down and tries her best to overcome any obstacles instead of keep whining the whole time and just hope that her problems will miraculously be solved.
Mia has also matured as a character compared to the first book and although I'm not her biggest fan yet, I liked her way more in Ravenstoke than in Winterborne.
Ravenstoke also introduces to us some new characters. The elusive Mr Winterborne makes his appearance as well as Cian. Cian... what can I say about him! I just loved beyond measure his charming personality, so much that I just forgot about Andreas! Well, I didn't exactly forget him, but Cian is really amazing! And the twists of the plot regarding him promise that there are more aspects of him to be revealed in the next book, which I'm just already dying to read!
Ravenstoke, may not be as heavy action-wise as Winterborne was and mostly serves as a bridge between the previous book in the series and the book to come, but it's still a really enjoyable book!Before I wrap-up with my review I just want to express my gratitude towards Augusta Blythe for providing me with a copy of her newest book as soon as it was available! Thank you so so much Augusta!