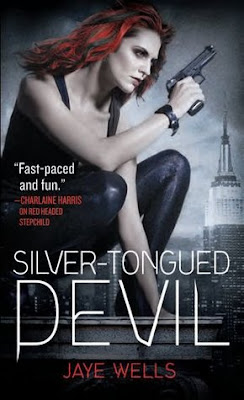 Now that the threat of war has passed, Sabina Kane is ready to focus on the future. Her relationship with Adam Lazarus is getting stronger and she's helping her sister, Maisie, overcome the trauma of her captivity in New Orleans. Even Giguhl is managing to stay out of trouble thanks to the arrival of Pussy Willow and his new roller derby team. But as much as Sabina wants to feel hopeful about the future, part of her doesn't trust that peace is possible.

Her suspicions are confirmed when a string of sadistic murders threaten to stall treaty negotiations between the mages and the vampires. Sabina pitches in to find the killer, but her investigation soon leads her down dark paths that have her questioning everyone she thought she could trust. And the closer she gets to the killer, the more Sabina begins to suspect this is one foe she may not be able to kill.

Jaye Wells returns and with a novel that completely took my breath away!I know I've said it many times already, but Sabina Kane is one of my favorite UF series and book by book, Wells' stories get me addicted more and more!

Silver-Tongued Devil picks up immediately after the events of the previous book and Sabina finds herself in a relationship with Adam, adjusting to a new life yet again, but now willingly and trying to help her sister Maisie to recover from the atrocities she survived on their grandmother's hands.

One thing is evident throughout the whole book: Jaye Wells has grown and matured as a writer and that is best portrayed in her characters. Maybe Wells was always such a mature writer but her characters hadn't grown up in the previous books, but one thing is for sure, in STD almost all - if not all, at least all the major ones - characters undergo some drastic changes.

Sabina is the one who matures the most. She has to take some difficult decisions and in this book she's at last in peace with her mage abilities.

Adam on the other hand is playing a larger role in this novel. And I don't mean that he just appears in more scenes, but we get to learn more about him, and although there were a couple of things I wasn't thrilled about him, in overall he started to act in a way that made me remember the alpha male of the first book in the series that made me drool all over him :)

I won't say more about the changes some of the other characters went through cause that would be spoilerish and believe me, one of the best attributes of this novel - well, apart from the humor! - are the spins in the main plotline.

A must read for all the fans of this series!