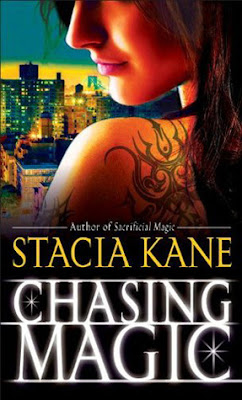 Magic-wielding Churchwitch and secret addict Chess Putnam knows better than anyone just how high a price people are willing to pay for a chemical rush. But when someone with money to burn and a penchant for black magic starts tampering with Downside’s drug supply, Chess realizes that the unlucky customers are paying with their souls—and taking the innocent with them, as the magic-infused speed compels them to kill in the most gruesome ways possible.

As if the streets weren’t scary enough, the looming war between the two men in her life explodes, taking even more casualties and putting Chess squarely in the middle. Downside could become a literal ghost town if Chess doesn’t find a way to stop both the war and the dark wave of death-magic, and the only way to do that is to use both her addiction and her power to enter the spell and chase the magic all the way back to its malevolent source. Too bad that doing so will probably kill Chess—if the war doesn’t first destroy the man who’s become her reason for living.


Stacia Kane needs no introductions... If you have ever read even one book of hers you know exactly what I mean. If you haven't already, what are you waiting for???

Chasing Magic is just perfect. Just as good as every other book in the series, just as dark, just as violent, just as twisted but beautiful and lyrical at the same time. I know. Twisted and lyrical or beautiful can't be put together in a sentence, but Kane manages to do just that. I'm a huge fan of the Downside Ghosts series, no news here and I honestly believe that it would take some really bad stories for Kane to write for me to change my opinion on this series. And so far, each book is as good as the previous one if not better in some cases.

Chasing Magic has non stop action. From the first chapter until the last, there isn't a single chapter that leaves the reader to "rest", 400 pages plus and there isn't a single moment that the story just progresses without something crucial happening. Not even one. Don't ask me how Kane manages that, but she does.

Some really sick and twisted form of magic makes its appearance in Downside and once more, Chess finds herself in the middle of all this. But along with catching a bad guy, Chess has to deal with her growing feelings for Terrible, with how to make a relationship between them work and finally accept that she is worth something.

The way I feel about Chess is unique. She is probably the only character in literature that I have ever felt this way. I can't understand her, not understand her exactly - that's not the correct way to phrase it, but more I can't comprehend why she treats herself that way. She can only blame herself for the majority of bad things that happens to her, but I can't help but love her and care for her, like a messed up sibling that no matter how much he/she hurts you you still care for and want nothing but the best. I can't really compare it in any other way.

She keeps destroying things again and again, she acts in a way that she very well knows that will bring her trouble or hurt herself and the people she cares for but still she goes and does exactly the worst and then keep blaming herself over and over again. One might think that such a behavior might turn me off, but on the contrary. Because somehow, Chess has really grown on me, and everytime she does something wrong, all I want is to turn back time for her and make things right. I care for her, in a way that no author has made me care for a hero before. And that is the brilliance of Kane.

That, and her writing style. To be honest, I don't know how many times I have said it already, but Stacia Kane is one hell of a writer. She doesn't write about gorgeous people, beautiful places and things or easy relationships. She writes about people with beautiful hearts, about messed up but oh so real people and about everything that is beautiful in its essence despite appearances.

Her world is dark and shitty and its residents maybe junkies or whores or whatever but it's a real world. A world where people struggle to survive and overcome their nightmares in any way they can, right or wrong. A world that sucks the reader in and doesn't let him "emerge" any time soon. A world, I love reading about.

All in all, Chasing Magic is just as good as the rest books of the series, that in its entirety is a series all lovers of UF should read. Trust me!

*This title was reviewed via NetGalley
Posted by Unknown at 17:03