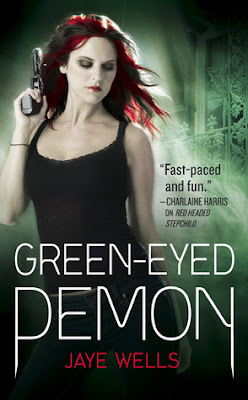 The clock is ticking for Sabina Kane. Her sister has been kidnapped by her grandmother, the Dark Races are on the brink of war, and a mysterious order is manipulating everyone behind the scenes.

Working on information provided by an unlikely ally, Sabina and her trusty sidekicks--a sexy mage named Adam Lazarus and Giguhl, a Mischief demon--head to New Orleans to begin the hunt for her sister. Once there, they must contend with belligerent werewolves, magic-wielding vampires and--perhaps most frightening of all--humans.

But as much as Sabina is focused on surviving the present, the past won't be ignored. Before she can save those she cares about most, she must save herself from the ghosts of her past.

Jaye Wells doesn't disappoint once more with the third instalment in her Sabina Kane series. Honestly, this series is among my favorite UF series and book by book it just gets better. The first book in the series remains my favorite so far, but still, Wells' writing style is so good and addictive that I can't possibly put her books down as soon as I start reading them.

Green Eyed Demon, continues right after the events that unfolded in the previous book and Sabina along with Giguhl and Adam travel to New Orleans following Maisie who was kidnapped by her grandmother.
The only thing that I didn't like in this book, was the fact that the first half was a bit slow, especially actionwise, when compared to the rest books in the series. But after a certain point, when things finally picked up, there was no way I could put the book down.

Again, the best characteristics of this book is the unique and intricate world building and the humorous tone of Wells' writing style. Giguhl is once more my favorite character and the addition of a couple more characters just made things even better.
Among those new characters is Brooks, and I just have to say that I truly admire Wells, not only for her guts to create such a complex and "difficult" character as Brooks but also for the way she portrayed him. Wells isn't taking the easy road and that is evident not only with her choice of characters but with the way she develops her main heroine as well. Sabina in Green Eyed Demon is so much different than the assassin we met in the first book, she has grown and changed through all the things that happened to her and changer her life and perception of things.

All in all, Green Eyed Demon is a must read for the fans of the series and in general the Sabina Kane series is among my favorite UF series right now.