Today I have the great pleasure of being the next stop in Jennifer Estep's blog tour of Kiss of Frost!
I have already read Kiss of Frost (you can check my review here) and let me tell you, it's AWESOME!!!
So, let's start!
Jennifer Estep Bio
(as seen on Jennifer's official site)

Jennifer Estep is a New York Times bestselling author, prowling the streets of her imagination in search of her next fantasy idea.
Jennifer writes the Elemental Assassin urban fantasy series for Pocket Books. Books in the series are Spider’s Bite, Web of Lies, Venom, Tangled Threads, and Spider’s Revenge. By a Thread, the sixth book, will hit shelves in March 2012, while Widow’s Web, the seventh book, is set to be released in September 2012.
Jennifer also writes the Mythos Academy young adult urban fantasy series for Kensington.Books in the series are Touch of Frost. First Frost, a prequel e-story to the series, is available as a download. The second book, Kiss of Frost, will hit shelves on Nov. 29, 2011. Dark Frost, the third book, will be published in June 2012.
Jennifer is also the author of the Bigtime paranormal romance series for Berkley.
~How many books are you planning to write in the Mythos Academy universe?
JE: Right now, I’m under contract for six books. Those books will focus on the overall story arc with Gwen and her friends battling the evil god Loki and his Reapers of Chaos.
Dark Frost, the third book in the Mythos Academy series, will be out in June 2012. Crimson Frost, the fourth book, is tentatively set for a January 2013 release.
Folks can visit my website at http://www.jenniferestep.com/ for excerpts and more information about my books. Happy reading!
~How did you decide to choose Nike as the main goddess of your story?
JE: I’ve always loved mythology and all the stories about the gods, goddesses, heroes, and monsters battling each other and going on these epic quests. But when I started to write my own mythology story, I decided to focus on a goddess that maybe wasn’t as well known, so I went with Nike. Since she isn’t as well-known, I think that gives me a little more freedom to put my own spin on her character and history.
Plus, I just thought Nike would be really cool to write about, especially since she’s the Greek goddess of victory. I thought it would be interesting to pit the goddess of victory against the ultimate evil, which the Norse god Loki in the Mythos Academy books. So far, I’m having a lot of fun writing about Nike, Loki, and everyone else in the books.
~Apart from Elemental Assassin and Mythos Academy, do you have any other plans for future books?
JE: I always have ideas for other books. I have more ideas that I could ever find time to write. LOL. Right now, I’m mulling over some ideas for a new adult urban fantasy series.
I also recently e-published A Karma Girl Christmas, which is a new e-story in my Bigtime superhero paranormal romance series. It’s available for 99 cents. I also recently reissued the three books in the Bigtime series – Karma Girl, Hot Mama, and Jinx – as $2.99 e-books. I’m hoping to e-publish some more books and short stories in the Bigtime series in the future.
But right now, I’m pretty busy writing my Elemental Assassin and Mythos Academy series, so we’ll see what happens with my other projects.
~Are there any authors that influenced your work?
JE: When I was in high school I discovered epic fantasy books by folks like J.R.R. Tolkien, David Eddings, and Terry Brooks. Those authors and others helped get me interested in reading more and more fantasy books of all kinds. Eventually, I decided to write my own fantasy books with my own characters and magic/world building.
~Which place in the world are you dying to visit?
JE: There are so many places I’d love to visit, including Alaska, Hawaii, London, Italy, Greece … Traveling is definitely something that I want to do more of.
Thank you so much Jennifer for your time here!
You can also find Jennifer:
- Official Website
- Facebook Page
- Twitter
And now,time for the giveaway!
Kiss of Frost Giveaway 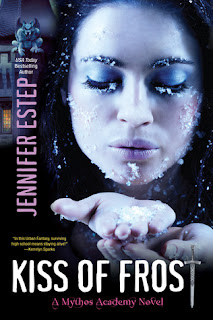 Logan Quinn was try­ing to kill me. My Spar­tan class­mate relent­lessly pur­sued me, swing­ing his sword at me over and over again, the shin­ing sil­ver blade inch­ing closer to my throat every time. A smile tugged up his lips, and his ice-blue eyes prac­ti­cally glowed with the thrill of battle...


I’m Gwen Frost, a second-year warrior-in-training at Mythos Acad­emy, and I have no idea how I’m going to sur­vive the rest of the semes­ter. One day, I’m get­ting schooled in sword­play by the guy who broke my heart—the drop-dead gor­geous Logan who slays me every time. Then, an invis­i­ble archer in the Library of Antiq­ui­ties decides to use me for tar­get prac­tice. And now, I find out that some­one at the acad­emy is really a Reaper bad guy who wants me dead. I’m afraid if I don’t learn how to live by the sword—with Logan’s help—I just might die by the sword...

Guidelines
~ The contest is open for US residents only!
~ You must be 13 years old or over to participate.
~ The winner will be chosen via Random.org
~ Being a follower isn't required but it's always appreciated!
~ The prize is submitted by the author/publisher and I have no responsibility whatsoever over it.
~ The contest will be open untilDecember 18th
~ The winner will be notified via e-mail and will have 48 hours to confirm his/her e-mail address before a new winner is selected.