EARLY REVIEW: Immortal Hope (The Curse of the Templars,#1) by Claire Ashgrove 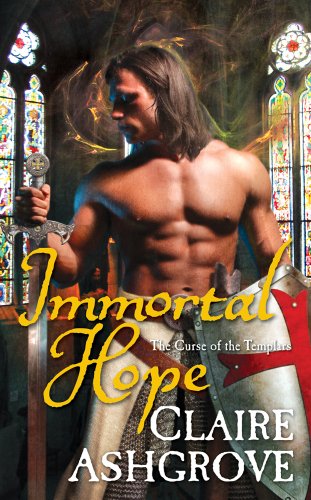 Centuries ago, Templar knights defied the archangels and unearthed the copper scroll that revealed the locations of the gates to hell. Cursed for their forbidden act, they now roam the earth, protecting mankind from evil. But darkness stalks them, and battles they fight bring them ever closer to eternal damnation. One promise remains to give them salvation—the return of the seraphs.

Embittered by his purpose, Merrick du Loire must honor an ancient pact and bring peace to his cousin’s soul, releasing him from the clutches of their enemy. When he stumbles upon history professor Anne MacPherson, he discovers that she possesses a sacred artifact that marks her as a seraph. Duty demands he set aside his personal quest and locate the knight she’s fated to heal. As Merrick struggles with conflicting oaths, Anne arouses buried hope and sparks forbidden desire that challenges everything he’s sworn to uphold.

Anne has six weeks to complete her thesis on the Knights Templar. When Merrick takes her to the Templar stronghold, he presents her with all she needs—and awakens a soul-deep ache that he alone can soothe. Yet loving Merrick comes with a price. If she admits she is destined for him, her gift of foresight predicts his death.

Review originally posted at Book Lovers Inc.
Immortal Hope surprised me!Really and truly surprised me in a really pleasant way! When I picked this title, all I knew about it was what the blurb revealed, there were no reviews about it at the time so to be honest, I didn't really know what to expect. And believe me, maybe knowing absolutelly nothing abou it was what made me love it as much as I did!
Immortal Hope is like reading BDB but with Templar Knights instead of vampires! Don't get me wrong, there aren't any similarities with BDB whatsoever, just the concept of a group of warriors who wait for their predestined mate. That's where the similarities between the two series begin and that's were they end.
From the very first pages of the story, the action is non stop and not only that, but the action scenes are so well written and vivid that it's like each battle is being unfolded before your eyes!
The characters are well developed and consistent and I'm not just talking about the main ones but about the secondary as well. I'm guessing that since some of the secondary characters appearing in Immortal Hope are going to be the main ones in future books, Ashgrove just wanted to give each of her knights the chance to tell something about him.
I was always fascinated by Templar Knights, and have read a number of books about them but most of them were mysteries. I could never imagine them starring in a paranormal romance and that's what intrigued me most about Immortal Hope. And I'm so glad I had the chance to read this book, cause let me tell you knights can be equally hot with vampires or any other paranormal creature out there, or at least, that's what Claire Ashgrove made me believe!
One other thing I was a bit afraid of was the religious connection that is unavoidably associated with the Templars and how would that be handled in a paranormal romance story. But once more, Ashgrove just proved wrong all my fears.
There are religious mentions in the book, there are angels in it but they are handled in such a way that they could as well not been there.
All in all, Immortal Hope is a very well written paranormal romance title, set in an intricate world, whose sequel I just can't wait to read!