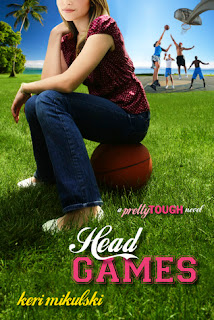 Taylor is calm, cool, collected, and ferocious on the basketball court. A total all-star. Not so much in real life. She may be tall, gorgeous, and an incredible catch, but just try telling her that!


And lately, Taylor doesn't know which way to turn: The summer showcase game is almost here. Her BFF Hannah roped her into a fashion show (eek!). And she can't decide between Zach - the super-popular, super-tall, super-off-limits basketball dynamo - and Matt - the sweet boy from her math class (who may just be dating her BFF's older sister). It's enough to make any girl's head spin!


Can Taylor strike a pose, land the boy of her dreams, and win the game?

While reading Head Games,what I mostly felt was... frustration!Don't get me wrong here,I really liked Head Games and I wasn't frustrated with the story,or the writing style,or the book,I was just mostly frustrated with what happened in the book.
Let me elaborate.Head Games is the story of Taylor,a really good basketball player,who as much confident as she is inside the court,her lack of self-confidence outside of it becomes the source of some major problems and misunderstandings that threaten her social status but most importantly her own dreams...All those misunderstandings and drama in this book,just left me feeling frustrated about Taylor but most importantly,with her as a character.There's a definite line between being sweet and polite and being a victim...And Taylor.as it's stated in the book,clearly can't discern that line...The story evolves around a short period of Taylor's life shortly before her school's basketball team play-offs.Add to that the fact that she has to help her friend and be her model for a fashion show and the sudden interest towards her of some of the school's most popular boys,and especially Zach's who is the ex of a super jealous teammate and Taylor's long time crush, and one can only imagine how much drama can erupt from all that!And believe me,one thing this book has in abundance is exactly that...teen drama!
Despite the fact that the language and the structure of this book was aimed to a younger audience than myself (and it's the first time I feel that way about a YA book,usually I'm a sucker for this genre) I did enjoy myself while reading it.That is when I wasn't frustrated with Taylor or mad with Kylie's (the super jealous ex/teammate) uncharacteristic behavior... But that means that I "lived" the story,so thumps up for the writer!
Having been a basketball player myself,I really enjoyed the descriptions of the games and the dynamics that were formed inside the team.But I have to admit that they striked me as a bit unrealistic or outstreched at times (in favor of maximizing the drama I already mentioned).Surely,there are rivalries inside a team,everyone can't get along perfectly but seriously,what player who fancies him/herself to be or become professional jeopardises the team's future over boys of all things?Surely,I had a teammate who always tried to get me a black eye (certainly not over a boy let me clear...) every time the coach couldn't watch her but that was on practice,never in any official game.Taylor's meltdown during a game,just because she saw a boy watching her or Kylie's horrendous behavior because she was ditched made me roll my eyes a bit to be honest,especially when the coach (who had some amazing ideas to bring the team together, mind you) just didn't put them both on the bench...
Anyway,Head Games was a light and fun read,cause despite the drama,there were some hilarious dialogues in it!I devoured it in a matter of hours!