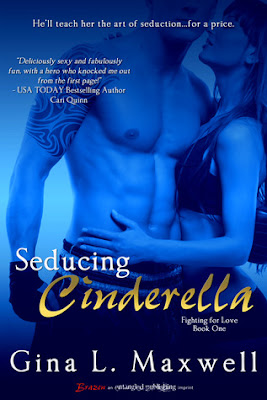 Mixed martial arts fighter Reid Andrews’s chance to reclaim his title as light heavyweight champ is shattered when he’s injured only months before the rematch. To make sure he’s healed in time, his trainer sends him to recuperate under a professional’s care—Reid’s best friend’s little sister, all grown up.

Disorganized and bookish Lucie Miller needs some professional help of her own. She’d do anything to catch the eye of a doctor she’s crushed on for years, so when Reid offers seduction lessons in exchange for 24/7 conditioning for the biggest fight of his career, Lucie jumps at the chance.

Soon Reid finds him himself in the fight of his life...winning Lucie's heart before she gives it to someone else.

Seducing Cinderella is a fun and sexy hot story, just perfect for a light summer read! I couldn't find a better or a more suitable book to fit my current mood.

This is the story of Reid, a mixed martial arts fighter who while trying to overcome a serious injure crosses paths with Lucie, his best friend's sister, and a woman he can't put out of his mind, even if he tries. Their story is hot, really hot, though not unique at all, except for the fact that the main hero is a mixed martial arts fighter, who behaves and knows things I would have never imagined. Because you see Reid, in order to persuade Lucie to work full time on his injury, promises to help her learn everything she needs to grab the attention of a doctor she's in love with for years. And when I say everything, I mean everything. He gives her fashion and styling advice, flirting advice and in an act of "generosity", has sex with her for educational purposes. Yeah right. That last part was a major put off for me, but because the chemistry between Reid and Lucie was scorching hot, I managed to move past it.

The plot was fast paced, and almost split in half. The first half was the best for me. It was funnier and I liked how Reid tried to teach Lucie the art of seduction. The second half was heavier on the romance department and hot, and although the sex scenes were well written and imaginative and the chemistry between the main characters palpable, the first half was sexier (even without the sex) and what I enjoyed the most. The twist at the end of the story that added a bit drama to the whole narration was predictable, so no big surprises here as well as predictable was the ending itself.

But, even though Seducing Cinderella was a story far from unique or unpredictable, it still managed to grab my attention and entertain me in all the things that matter. Because Reid is the kind of man any woman would want beside her, Lucie is sweet and caring and full of insecurities as any real woman out there is and their story sweet and sexy. And after all, that's what I'm looking for in a romantic novel. Characters that I can identify with and a romantic plot to satisfy me. And Gina Maxwell gives her readers all that.

All in all, Seducing Cinderella is a fun story I totally recommend to all romance lovers. It will entertain you up to the very last page.

*This title was provided for review courtesy of Entangled Publishing