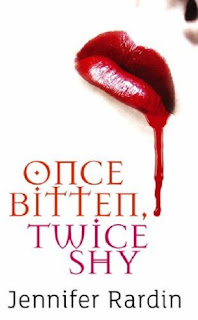 I'm Jaz Parks. My boss is Vayl, born in Romania in 1744. Died there too, at the hand of his vampire wife, Liliana. But that's ancient history. For the moment Vayl works for the C.I.A. doing what he does best--assassination. And I help. You could say I'm an Assistant Assassin. But then I'd have to kick your ass.Our current assignment seemed easy. Get close to a Miami plastic surgeon named Assan, a charmer with ties to terrorism that run deeper than a buried body. Find out what he's meeting with that can help him and his comrades bring America to her knees. And then close his beady little eyes forever. Why is it that nothing's ever as easy as it seems?

Once Bitten, Twice Shy by Jennifer Rardin left me with mixed feelings somehow.I know i wasn't all crazy about this book,but i can't either say that i didn't like it at all.I found myself somewhere in between but with a definite feeling that i expected something more of this book.
The beggining is just amazing.I loved the world,i loved Jaz and i was drawn to Vayl.The writing style was good,the pacing even and until the last page i wasn't bored for a minute.I just kept reading,if not anxious to see how things ended,at least curious.But,i thought that this book,though very good executed indeed,lacked a certain spark especially after the first half.
The world Rardin created was fantastic.Full of spies and missions plus the paranormal element to spice things up!I fell in love with this world immediately and to be honest at points i was a bit reminded of the tv show Alias...I know,the resemblances weren't really there,but in my mind,the way Jaz and Vayl lived just reminded me of that show!Apart from the world,Jaz herself is an amazing character.Independent,smart and born to be a leader.A strong heroine and among the best heroines created in the urban fantasy genre.
Vayl on the other hand,has definitely potential...I didn't "see" much of him in the first book of the series,at least not much in order to regard him as the super sexy alpha male,but the material to become exactly that kind of hero is there.Unlike Cole...I just couldn't connect with him whatsoever and to be honest i can't even regard him as a potential opponent to Vayl,for that all-so-famous triangle to form.I just couldn't see him as a potential lover and that is maybe because of the way he responded to Jaz after just a spontaneous kiss.You kiss someone you barely know for a total of 5 minutes and the next time you meet him you actually believe that something is going on between you?In my world that's not sexy,but quite lame...
Anyway,as i said the first half of the book was really good,but after that, things just got downhill a bit.Rardin spent half of her book to built a mysterious atmosphere around both Jaz's and Vayl's past only to just give rush explanations on the other half.The major turn downs was firstly the way Jaz just sucks up major things concerning herself not demanding explanations even after the book finished and secondly how Jaz talks for the first time about things of her past.I really don't want to say more for fear of spoilers,but if you'll read the book,you'll know exactly what i mean.After those two incidents i just lost half the fun.And although as i said,it's not that i didn't like this book,somehow i feel that it could have delivered much more...Because everything is already in there!
To wrap it up,although the first installment in the Jaz Parks series didn't leave me exactly astonished as i honestly expected,it's not a bad book whatsoever and a series that seems really interesting.So,i will read the next book,and hope that the things that put me off in this one,will be absent in the next!