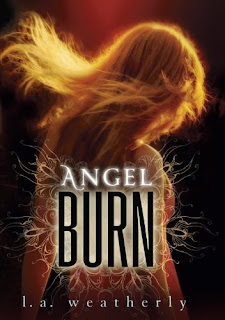 
Summary:
Willow knows she’s different from other girls, and not just because she loves tinkering with cars. Willow has a gift. She can look into the future and know people’s dreams and hopes, their sorrows and regrets, just by touching them. She has no idea where this power comes from. But the assassin, Alex, does. Gorgeous, mysterious Alex knows more about Willow than Willow herself. He knows that her powers link to dark and dangerous forces, and that he’s one of the few humans left who can fight them. When Alex finds himself falling in love with his sworn enemy, he discovers that nothing is as it seems, least of all good and evil. In the first book in an action-packed, romantic trilogy, L..A. Weatherly sends readers on a thrill-ride of a road trip — and depicts the human race at the brink of a future as catastrophic as it is deceptively beautiful.

I recently read Angel by L.A. Weatherly and i was quite pleasantly surprised!I love angel stories and this one is definitely different than the one's i've read so far.Very well written and with a unique story.
The cover of the US release i think is better than the UK one.Don't get me wrong but i think that the girl in the UK cover seems a bit angry and terrifying,though this one is really beautiful!
What do you think?
Posted by Unknown at 19:38