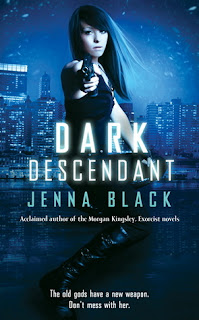 Nikki Glass thinks of herself as an ordinary person, although her skills as a private investigator sometimes verge on the uncanny. But whatever Nikki might think of herself, she is far from ordinary, as she discovers one life-altering night when she loses control of her car on an icy road, accidentally killing a man who appears out of nowhere. The man Nikki struck with her car was an immortal who wanted to die—and she has now inadvertently stolen his immortality. As a descendant of the Greek goddess Artemis, Nikki’s talents have reached supernatural proportions. Of course, before she was an immortal, there wasn’t anyone who wanted her dead…

What i think:
I always love to find exciting new urban fantasy series and this particular one seems really interesting!I haven't still read anything that combines so evidently Greek mythology elements in the plot and i'm really looking forward to reading a series that promises to be really good!