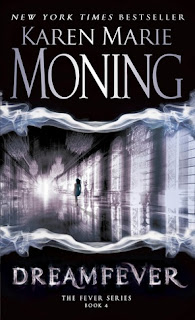 They may have stolen my past, but I’ll never let them take my future.


When the walls between Man and Fae come crashing down, freeing the insatiable, immortal Unseelie from their icy prison, MacKayla Lane is caught in a deadly trap. Captured by the Fae Lord Master, she is left with no memory of who or what she is: the only sidhe-seer alive who can track the Sinsar Dubh, a book of arcane black magic that holds the key to controlling both worlds.


Clawing her way back from oblivion is only the first step Mac must take down a perilous path, from the battle-filled streets of Dublin to the treacherous politics of an ancient, secret sect, through the tangled lies of men who claim to be her allies into the illusory world of the Fae themselves, where nothing is as it seems—and Mac is forced to face a soul-shattering truth.


Who do you trust when you can’t even trust yourself?

Dreamfever is yet another awesome book in the Fever series!Words can't describe who much i love this series and this book is amazing!
Before i continue with the review i must say that to anyone that hasn't read up to book 3 in the series there will be some spoilers about the previous books.
The story picks up exactly where Faefever ends,only this time,the first few chapters are being narrated by Dani, a fact that alone shows the extend of damage the events of the previous book inflicted on Mac.
I must say,the whole death-by-sex thing the Fae are capable on inflicting among humans bothered me from day one.I totally understand the need for the story of such a thing but it bothered me nevertheless.Seeing Mac suffering the consequences of the most savage rape imaginable was bad for me...I am a bit sensitive towards women suffering from any kind of violence from men only because they are able to inflict that kind of pain.I really understand the need of such an event for the story to progress and i'm not judging that fact in the book whatsoever,i just don't like to read about it.Hopefully,those pages don't last long and in any case,Moning describes Mac's recuperation very well,so your mind isn't all the time to the events that led to her condition but anyway,i still didn't like it.
Apart from the rape part,the story in Dreamfever progresses rapidly.The world as we knew it from the first books and was slowly starting to change in Faefever is now completely changed!So is Mac herself.One might say that Mac's character changes according to the world and the events that surround her.And i really like that fact.A person should adjust to whatever happens to him/her and emerge from everything stronger.And that's exactly what Mac does.
Barrons,is as good and enigmatic as ever!And i might add,as sexy as ever!The fierceness with which he protects Mac and the lenghts to which he goes to help her comeback is a tremendous bonus to his character.I still don't like how Mac depends on either him or V'lane to save her but at least one of the changes of her character means that at least she now excepts less from them both.
V'lane,on the other hand is pretty much of no much notice to me in this book.I never really liked him as a character and after what the fae did to Mac,i more than ever dislike him,despite the fact he didn't do anything to her.The way he regards human race with such arrogance does little to help him.
The ending of Dreamfever,is by far the worst cliffhanger ever...Just don't read the last chapter if you haven't on your hands Shadowfever!Do yourselves a favor and avoid the misery of not being able to immediatelly learn the rest of the story.Just have a copy of Shadowfever right next to you before the last chapter!