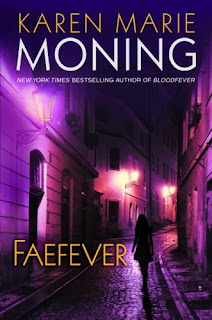 The New York Times bestselling author of Darkfever and Bloodfever returns to Dublin’s Fae-infested shores in a bold, sensual new novel. Hurtling us into a realm of seduction and shadows, Karen Marie Moning tells the enthralling tale of a woman who explores the limits of her mysterious powers as she enters a world of ancient sorcery—and confronts an enemy more insidious than she could ever have imagined.


He calls me his Queen of the Night. I’d die for him. I’d kill for him, too. When MacKayla Lane receives a torn page from her dead sister’s journal, she is stunned by Alina’s desperate words. And now MacKayla knows that her sister’s killer is close. But evil is closer. And suddenly the sidhe-seer is on the hunt: For answers. For revenge. And for an ancient book of dark magic so evil, it corrupts anyone who touches it.


As All Hallows’ Eve approaches and the city descends into chaos, as a shocking truth about the Dark Book is uncovered, not even Mac can prevent a deadly race of immortals from shattering the walls between worlds—with devastating consequences.…

I don't know how many times i've said this word in the past days,but God,i loved Faefever.Once i picked this book up,i just couldn't put it down,and i'm guessing that i will have the same feeling no matter how many times i'll read those books!Karen Marie Moning once again delivers a book full of suspence,mystery and sexual tension!Just perfect!
In Faefever everything changes!This book stands as a bridge between a normal world and a world consumed by darkness,standing on the edges of a dystopian novel.It's a bridge between the Mac we got to know in Darkfever and a Mac that will completely change.I don't think that Faefever is the 3rd book in this series by accident.It's right in the middle of the story with a first half closer to what we knew from the previous books and the second,slowly introducing the reader to a different and darker world.
Once again,Mac's personality develops,a development i'm not sure will stop until the story is finished.Along with her world that darkens,she herself starts acting and thinking in a completely different way than in the first book.Still,she struggles to keep what she can from her old self,but the story needs a different approach from her towards things and she adjusts perfectly.
One thing i loved in Faefever is that we are introduced to a couple new characters.We meet more closely with Christian,the enigmatic Scott that seems to be holding a special part in the story and Dani,the young sidhe seer with the really bad mouth but adorable all the same!I don't know how Dani will evolve and what her place in the story will be by the end,but i really thing that it's a character that really needs a book about herself in some point!It's a really interesting character despite how young she is and i really enjoy reading about her.
We also get to know more about inspector Jayne,another character i really enjoy reading about.I like that he too,doesn't care how a job will be done,as long as it gets done!
All in all,Faefever,is yet another astonishing book in the Fever series and yet again,the ending is a major cliffhanger.Seriously,the endings in those books become worse (in terms of suspenfull endings) as the time passes.But i still love them,and love the way i am totally sucked into this dark world!